Maps of Cornwall in Cornish

I have spent some time with the free and open-source GIS software QGIS, making some maps of Cornwall in Cornish. I used the free GIS data available at MapCruzin, where a map of roads as a shapefile, which is ultimately derived from OpenStreetMap data, is available along with locations of settlements, and some landcover classes such as inland water and forests. See also Robin Wilson's directory of free GIS data, and the UK Ordnance Survey OpenData resources.

Data-dependent styling is used to show the different categories of road in different colours ranging from green for trunk roads, red for primary, orange and yellow for secondary and tertiary and blank for other roads, and dotted lines for footpaths, bridleways and cycle routes. The placenames are the list of Cornish language placenames in the Standard Written Form, published by the Cornish Language Partnership, MAGA Kernow. They are similarly styled to give more prominence to towns and villages then smaller settlements.

I have translated some further placenames into Cornish, including of some geographic features such as woodland and water bodies etc, and used the 'Cornish Place Names and Language' book by Craig Weatherhill for assistance. Please note that the additional placenames may not have been checked with anyone and should be considered tentative. The source files, including the names in Cornish are available in shapefile format or attributes tables in CSV from this page.

I used a digital elevation model based on the Shuttle Radar Topography Mission, and coloured it in the same colour-scheme as the old Bartholomews 1:100000 scale maps. I have used the 1 arcsecond SRTM which is now available.

The below maps display a sample area of the map that links to the larger PNG. These are large files up to 32MB each, at 1:100k scale if printed at A1. The scale is the all-numeric form of the OS grid references, the units in metres. The grid squares are of size 10km. 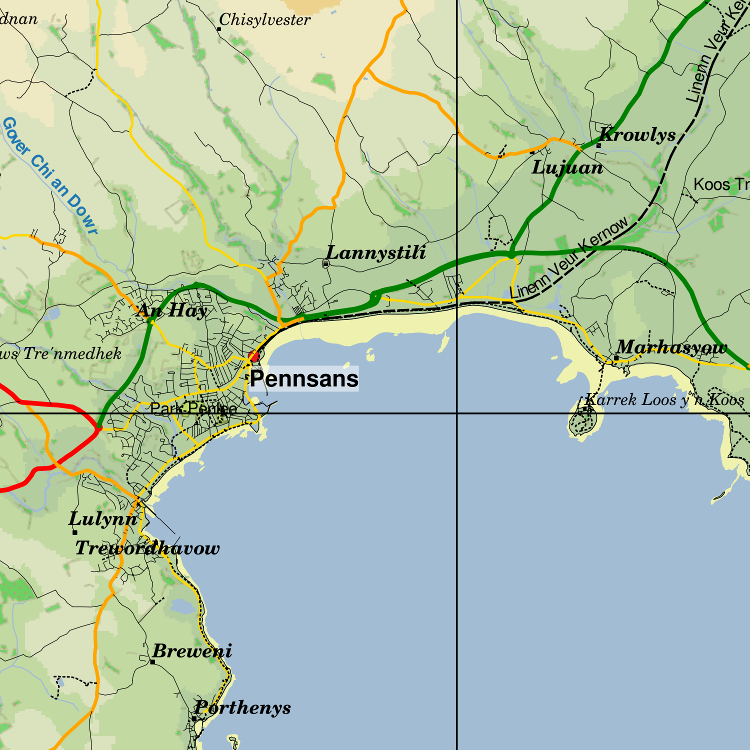 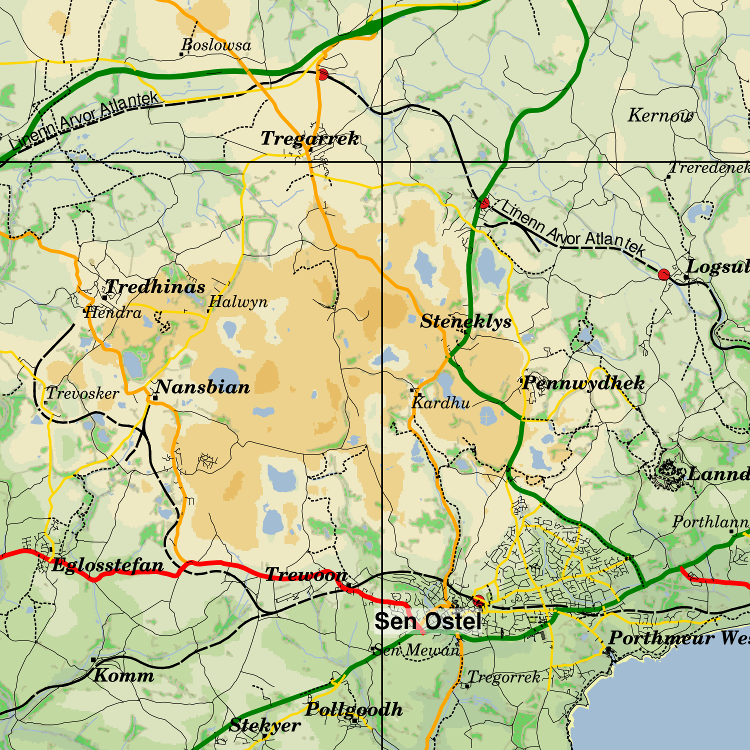 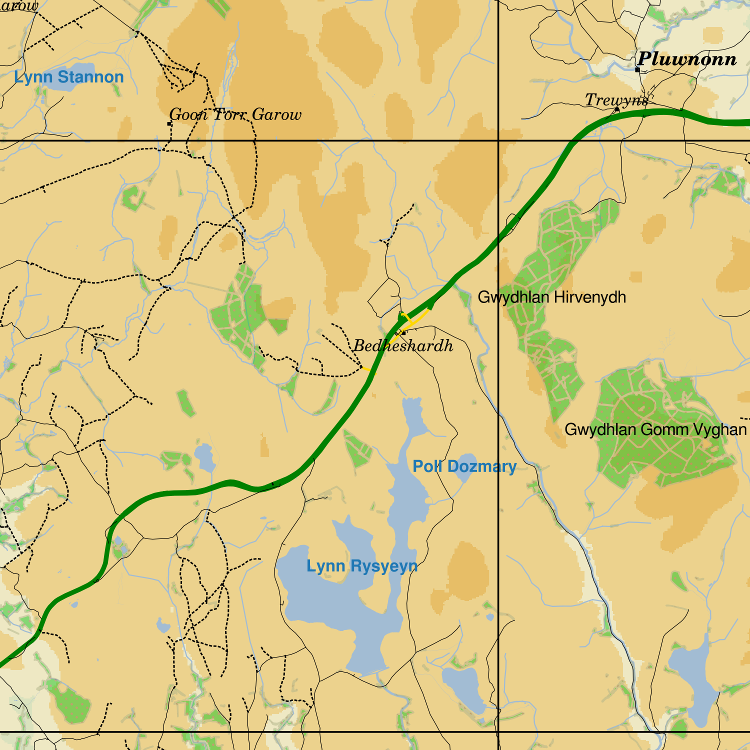 As a preview of what is possible at larger scales, here are couple of maps of the Truro area at a 1:25000 scale if printed at A2, using the same scheme, and using contours instead of shading. I generated these contours in QGIS from the SRTM 1 arcsec data, resampling the raster to produce a smoother result as suggested here. The OS VectorMap ones look smoother, but come in a large number of small tiles needing to be combined. 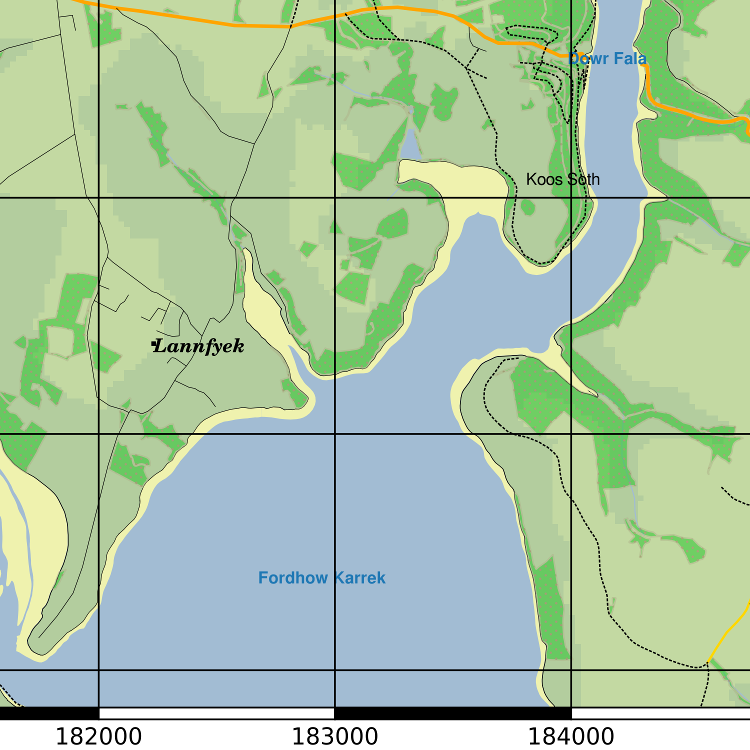 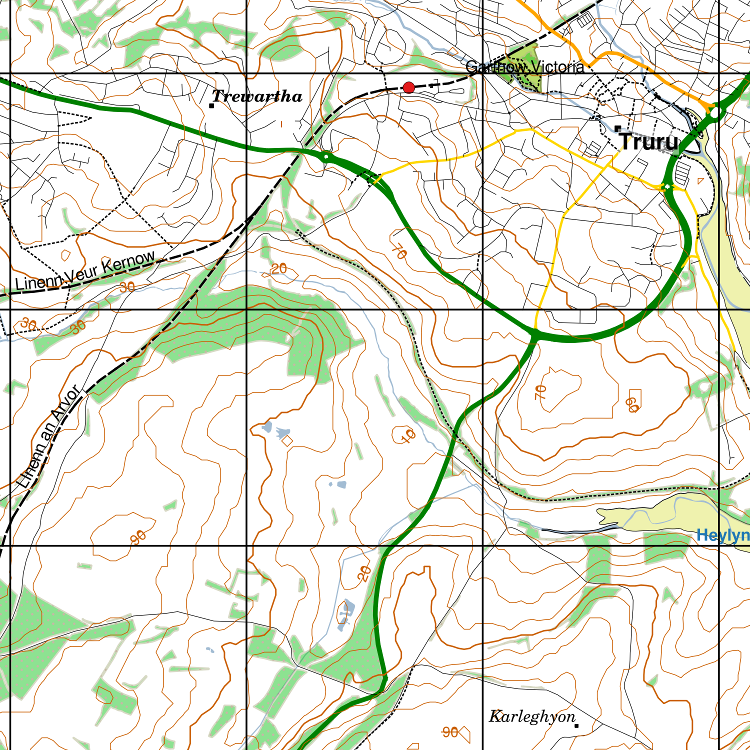 I have also created some cycling maps of Cornwall, colour-coding both elevation and slope, which have their own page here.