Looking for the Aurora Borealis from Cornwall

Last night (17th-18th) the Aurora Borealis was seen from the UK. After having a red alert from the Aurora Watch UK service at Lancaster University I had a look for it just after midnight.

I couldn't really see anything from just outside Truro, although the sky seemed a bit brighter I wasn't sure whether that was just a bit of mist illuminated by artificial lights. I think the peak of the storm was slightly earlier, when it was partly cloudy where I was.

Have a look at the link below to see pictures from other people who did see it.
Aurora Watch UK Flickr Group

My own pictures are as follows: 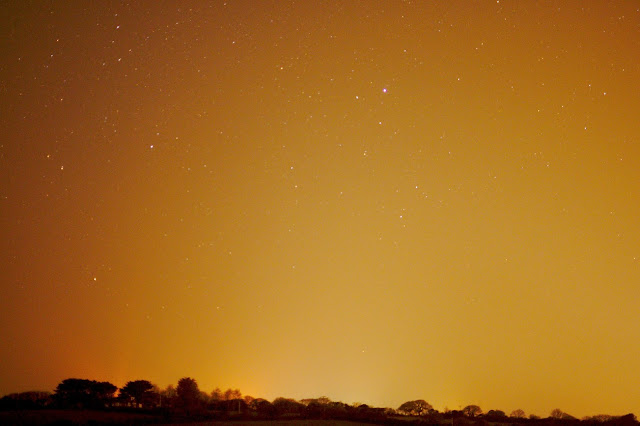 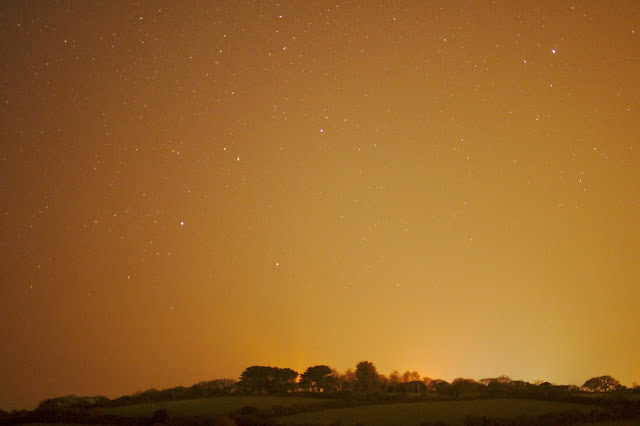 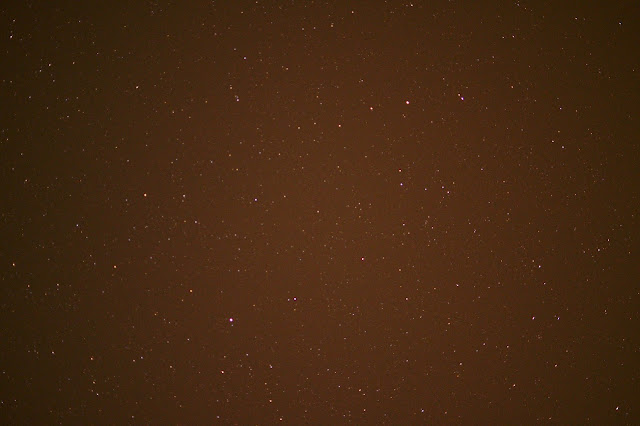 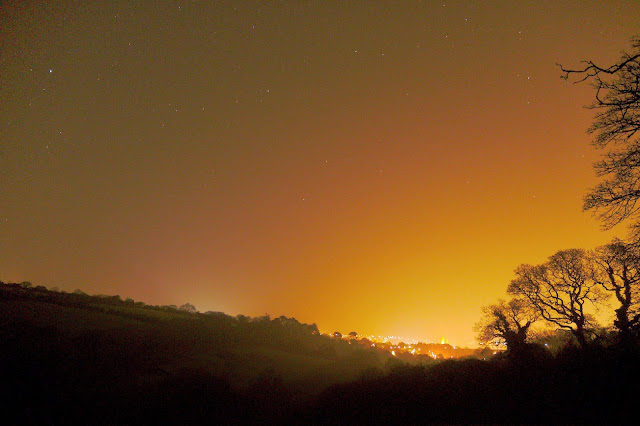 As an entry to John Michael Greer's Great Squirrel Case Challenge (the name based on a proposal by high-school debaters in Seattle to generate the USA's electricity by vast numbers of squirrels turning wheels), here is my proposal for the world's most absurd energy solution: 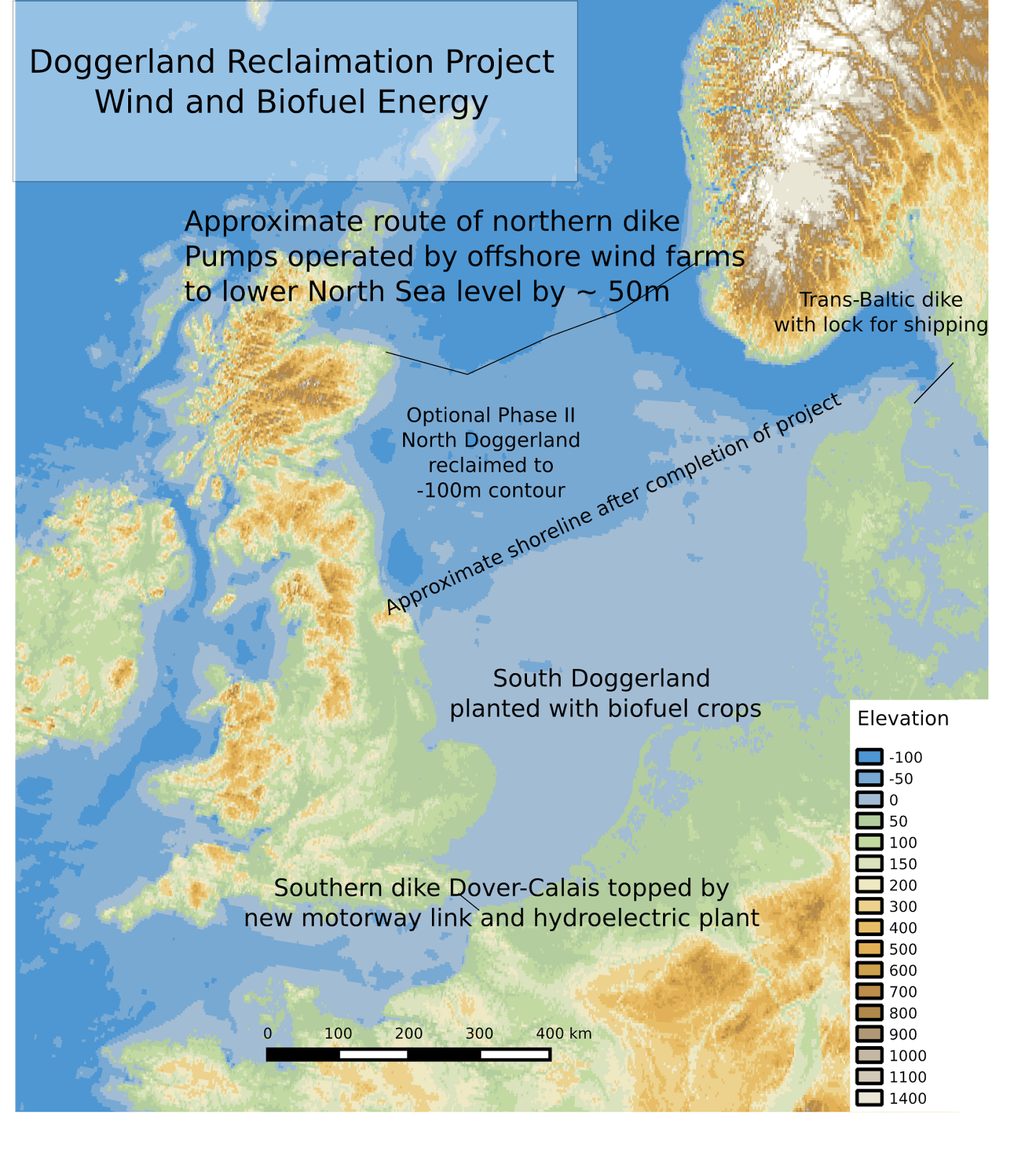 The Doggerland Reclaimation project would use a series of dikes to allow the drainage of part of the North Sea using power generated by offshore wind farms along a dike from Aberdeen, Scotland to Bergen, Norway.

A second dike from Dover to Calais would allow water in to generate hydroelectric power. This would also carry a new motorway link to complement the Channel Tunnel and be linked to a new container port to replace Rotterdam and Hamburg.

The lowered sea would make the shallower southern part of the North Sea dry land which would be planted with fast-growing conifers for wood-chip biofuel power plants.

One of the problems with the maps in my last post is that the vertical scale of the landforms is completely lost, it is impossible to tell whether a slope is shallow or steep.

A possible way to bring this information back is to grey out the shallowest slopes which I have done progressively for slopes less than 5 degrees in the maps below: 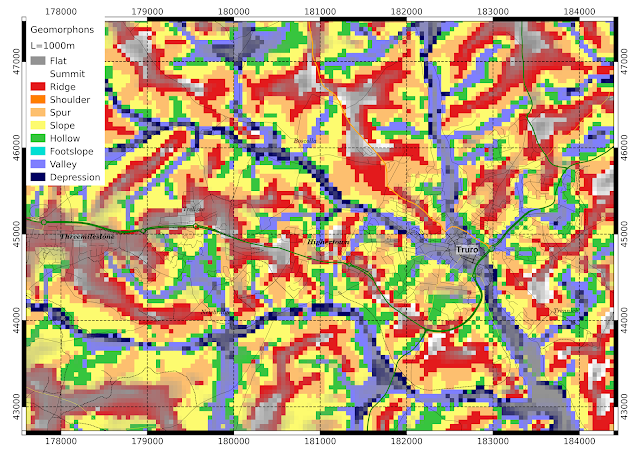 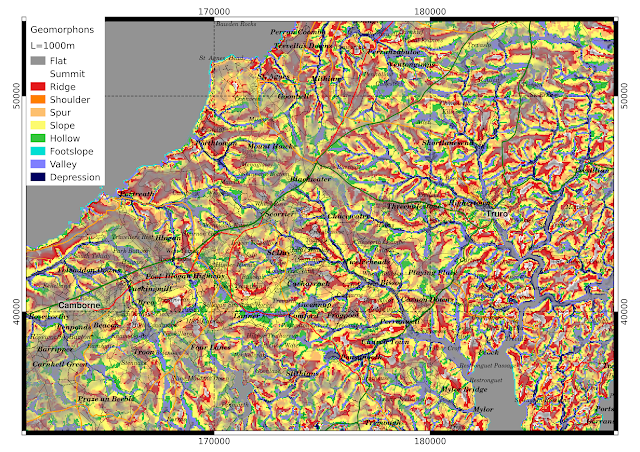 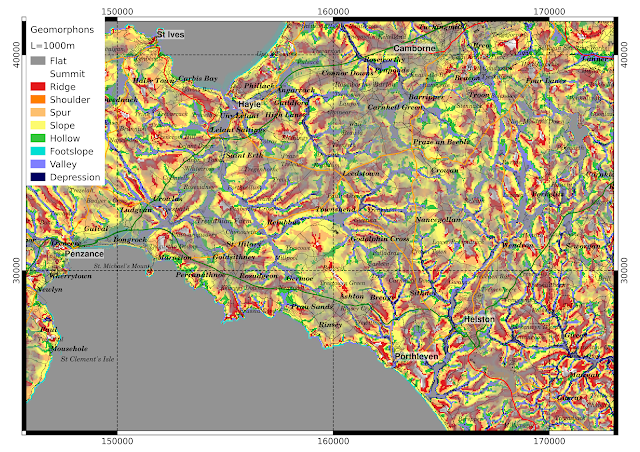 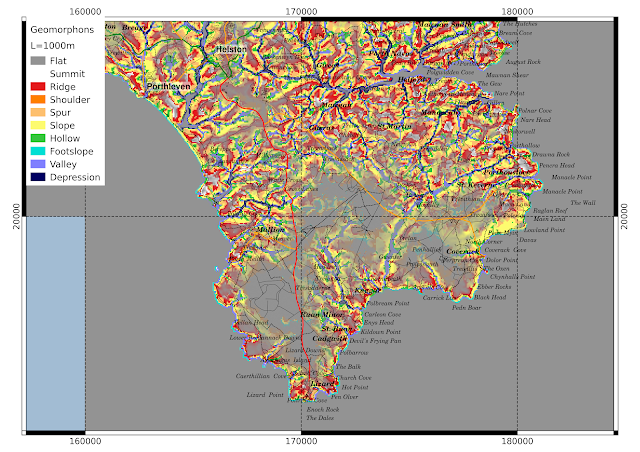 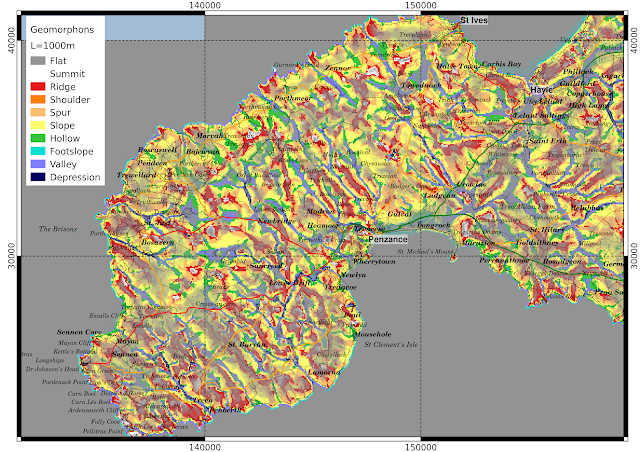 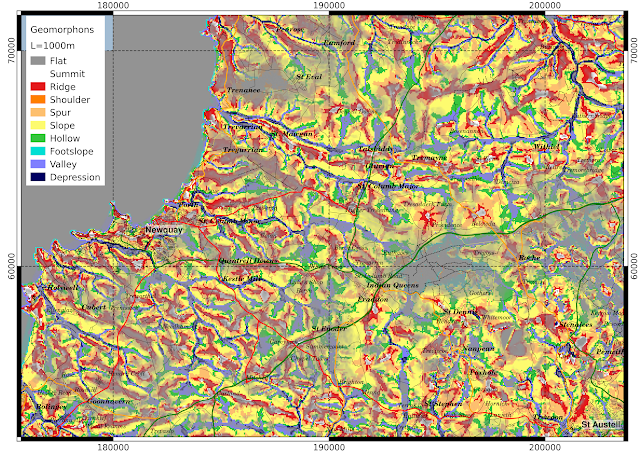 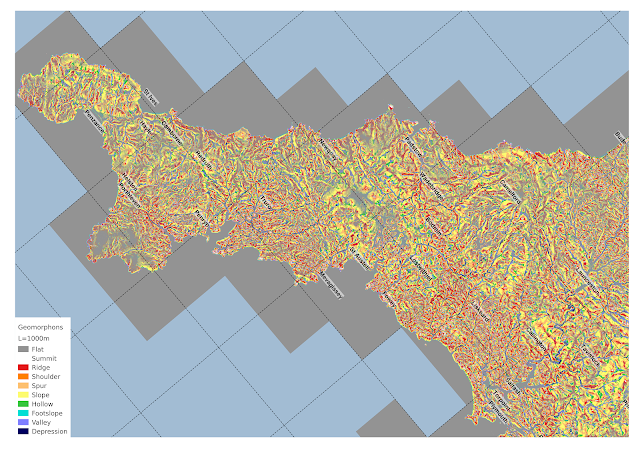 Some time ago I mentioned Geomorphons, a machine vision based approach to topographic analysis promoted by Stepinski and Jasiewicz.

If you don't know what a geomorphon is, here's a link to the Space Informatics Lab at University of Cinncinati, see also the papers: Stepinski+Jasiewicz 2011, Jasiewicz + Stepinski 2013

At the time I first came across this I had some trouble getting GRASS7 to install and get the extension working in Linux so I tried running GRASS7 in windows inside a VM but it didn't really work well.


Now however I have a working GRASS7 installation on Linux and here's a few demonstration maps, which show the broad categories of landscape position. Geomorphons use a line of sight approach best explained by the links and papers above.

I have used a search distance of L = 1000m in these maps, using Shuttle Radar Topography Mission data for the British Isles. I've set a threshold for flatness as 0.2 degrees, which is probably too small because in flat areas I'm not confident of the reality of these interpretations.

Geomorphons have a different kind of scale-dependence than the usual differential geometry based approaches used, though it is not independent of scale, it is more so than a simple slope analysis.

Co-ordinates are OSGB all-numeric throughout.


Changing the threshold for flatness to 1.0 degrees, flat areas such as Borth Bog are shown as such on the map.

A closeup with 5m data: 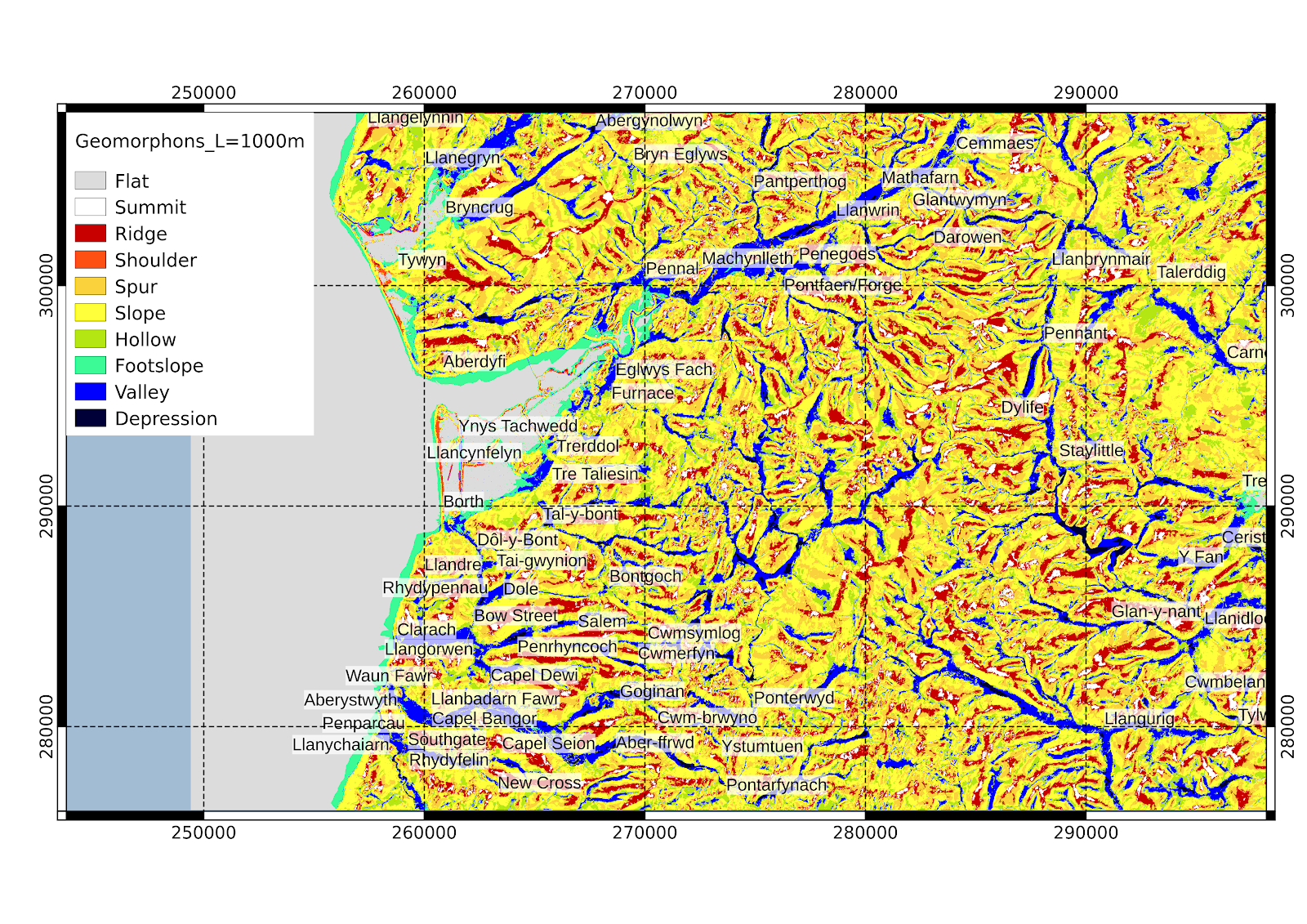 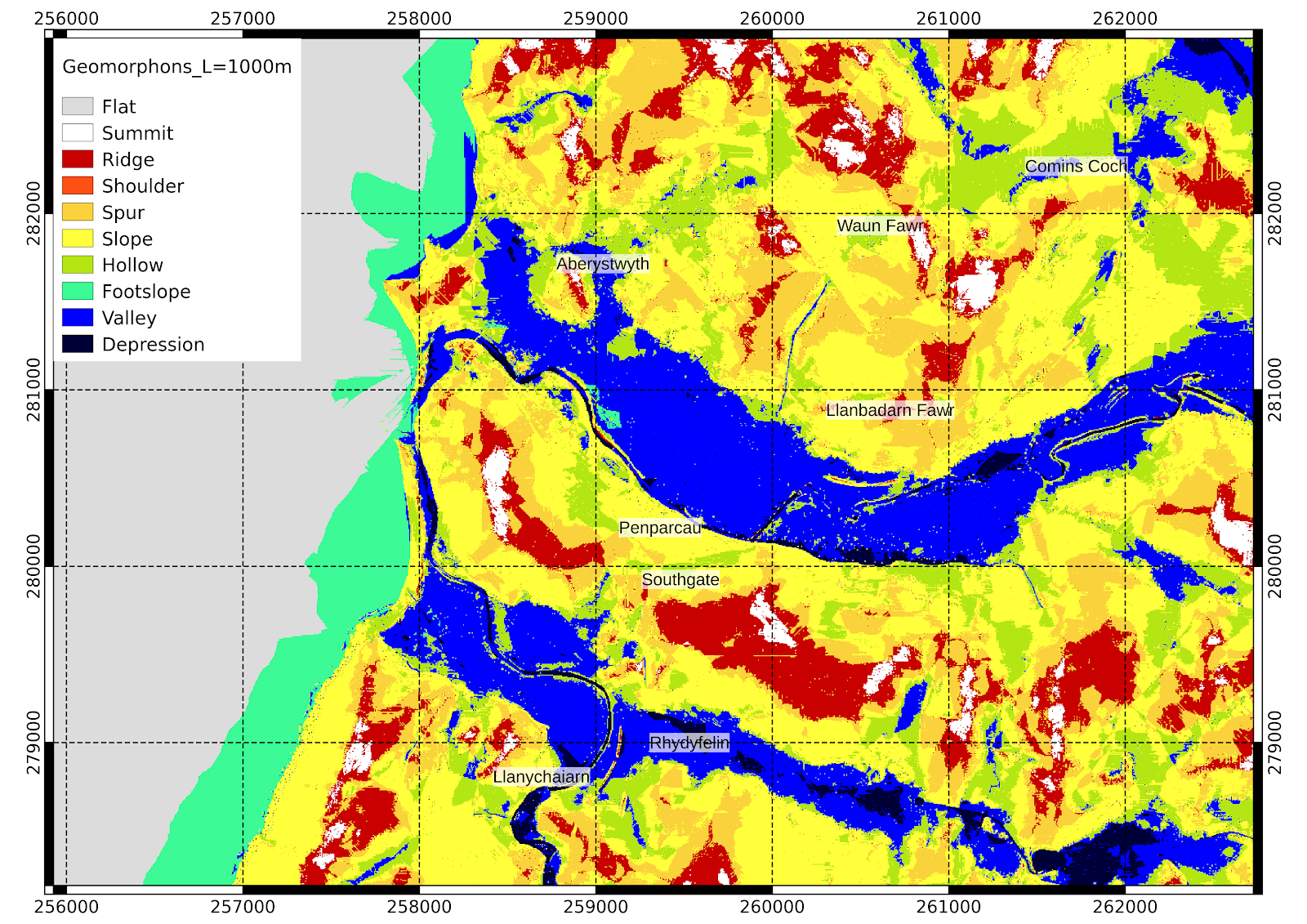 Having had Graham Robb's "The Ancient Paths" for Christmas, I note that the author noted the importance of the bearing of the rising Sun on the summer solstice to the ancient Celts of Gaul.

So here are a few maps of Cornwall which have been rotated such that 50 degrees east of North is up:

I've also altered the elevation pallete to make fuller use of it compared to my previous maps. 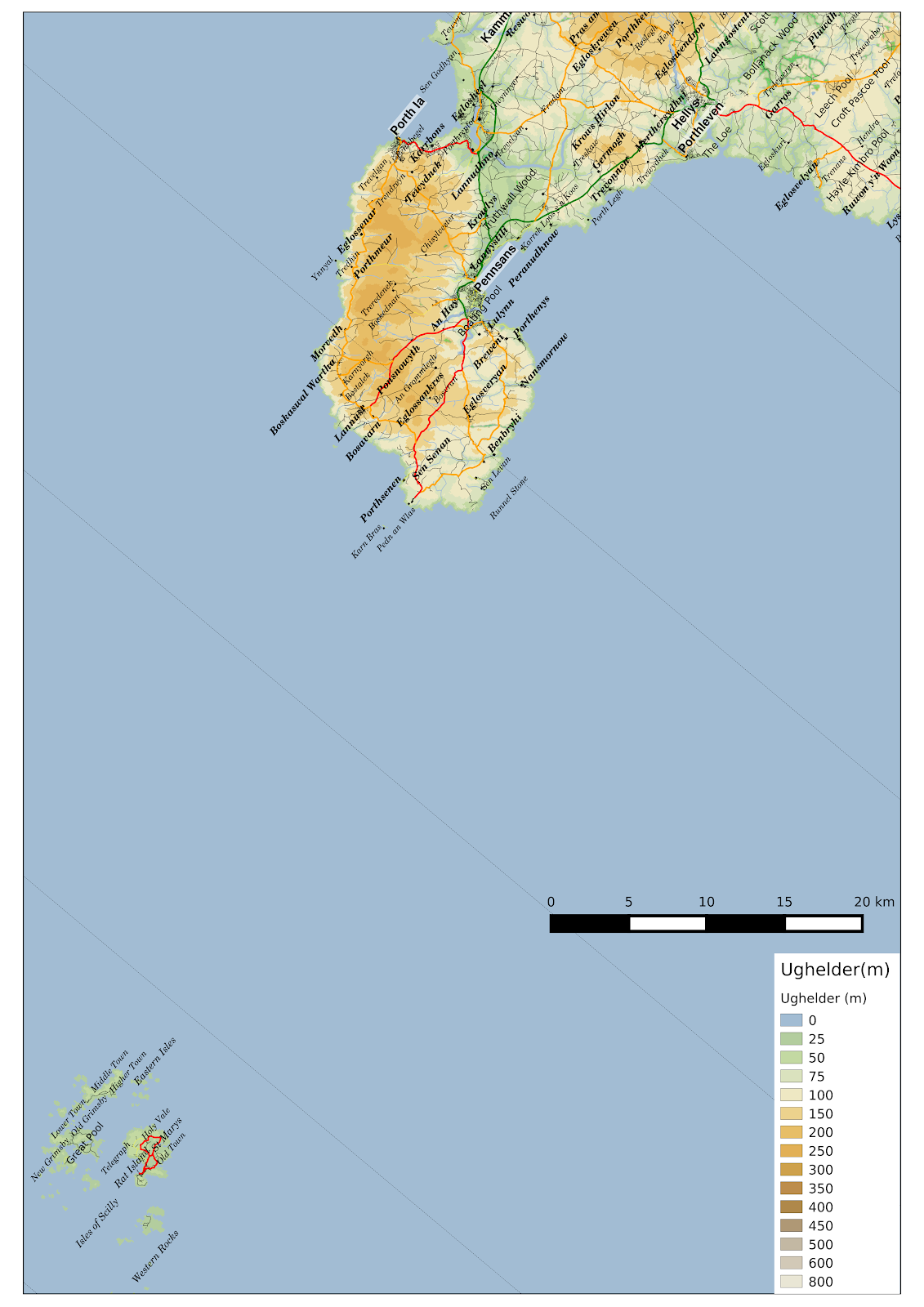 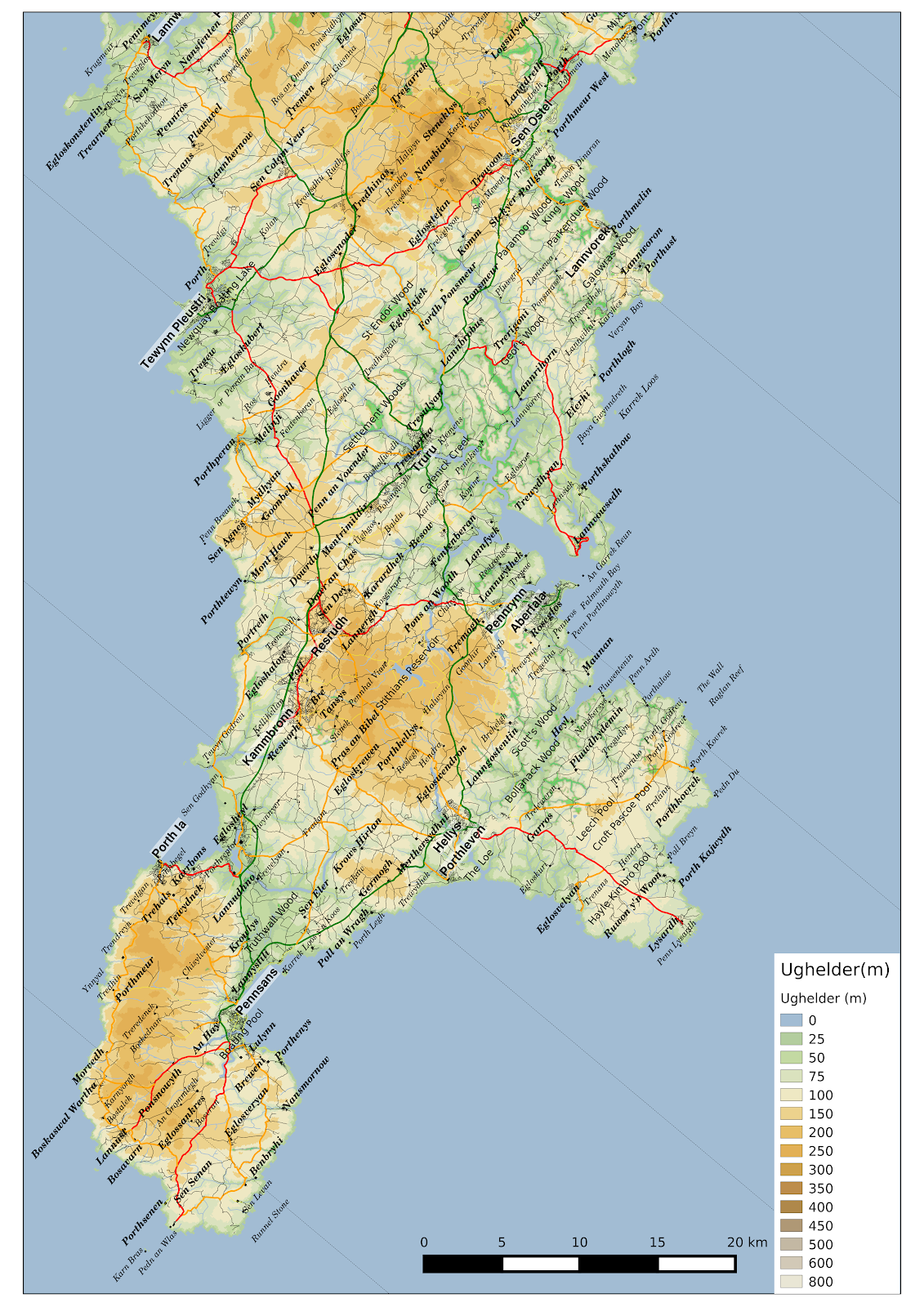 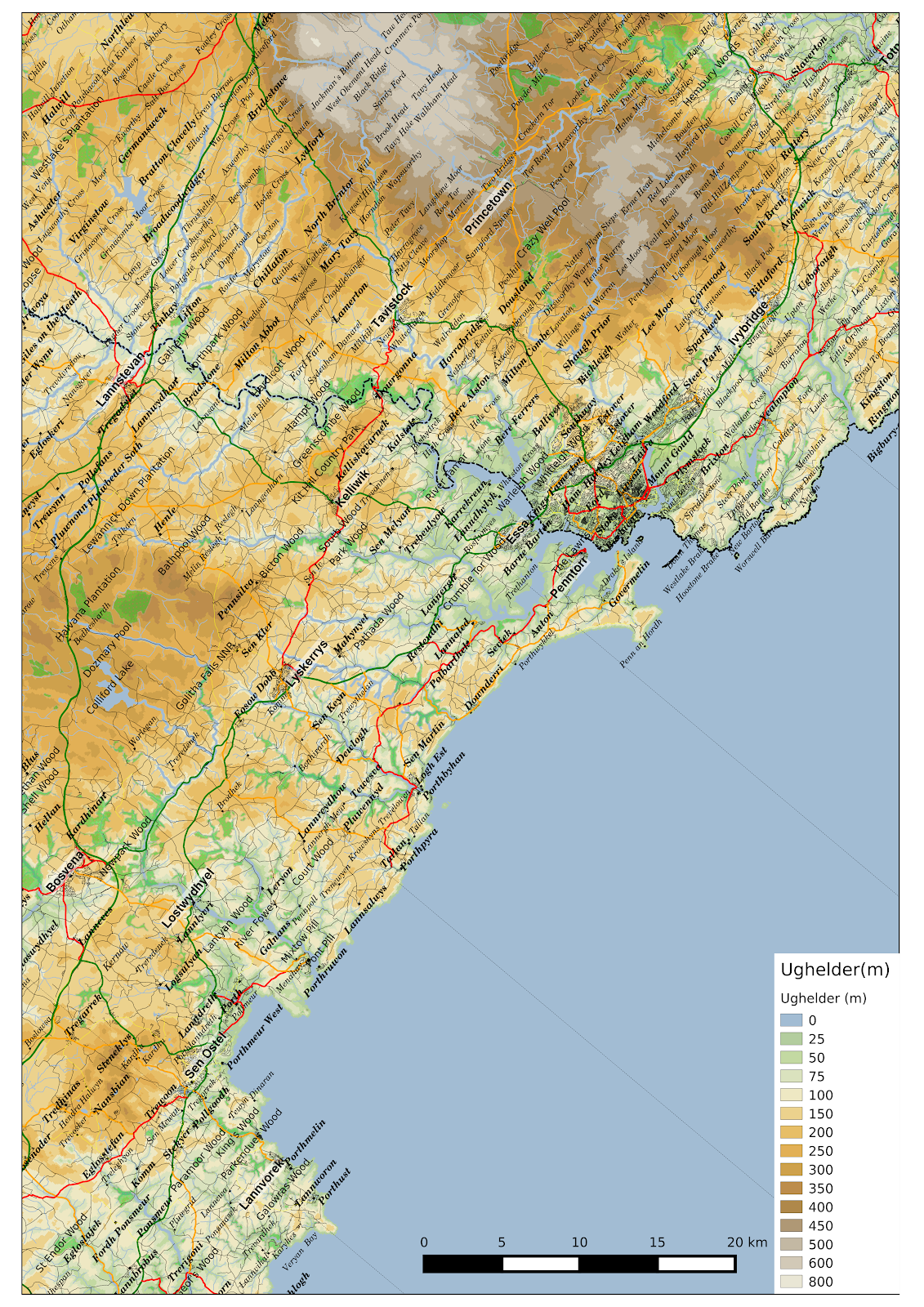 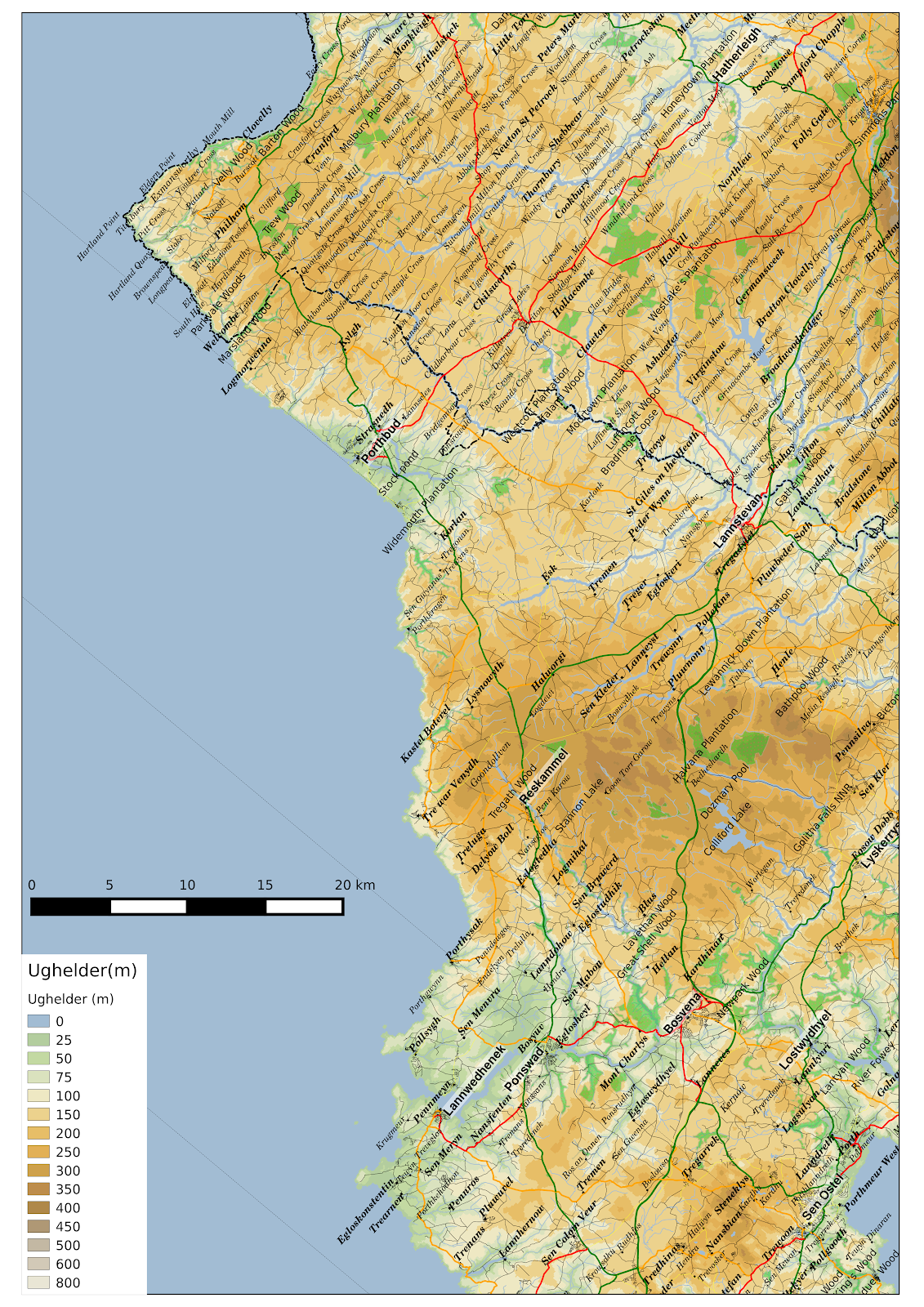