A while ago I posted a links page. Here's a couple more that I saw recently.

The Geological Society has produced a 100-Great Geosites Interactive Map for UK and Ireland.

Also there is the Quaternary Research Society with their top 50 quaternary sites.

Apparently the Giant's Rock in Porthleven floated there via an iceberg, possibly from Greenland.

An unusual application of a MaxEnt habitat suitability model

The MaxEnt software is often used by ecologists, and others for species habitat modeling based on environmental layers.

So some data I used from the 2011 UK census (England, Wales and Cornwall) was 1. those with a skill in the Welsh language (the full question was only asked of census respondents living in Wales) and 2. those self-describing as Cornish for national identity.

The data is converted from census output polygons, to dots randomly placed within the part of the output polygon below 300m altitude.

Although there is quite a lot of land above 300m in Wales, there is actually only one or two census output area polygons that entirely disappear when terrain above 300m is cut out. So if you're in Blaenavon, apologies for deleting you.

Using the environmental layers of elevation, slope (from Shuttle Radar Topography Mission) and distance from the coast, this is the output: 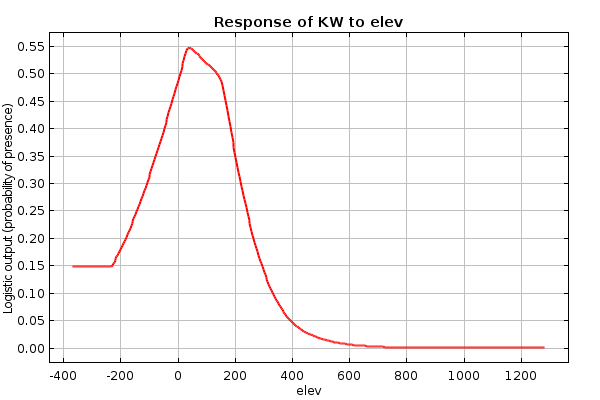 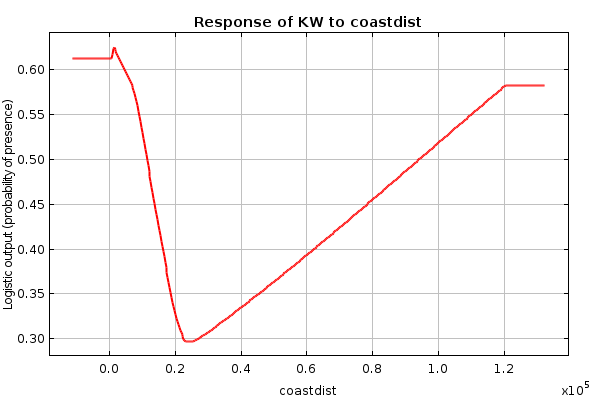 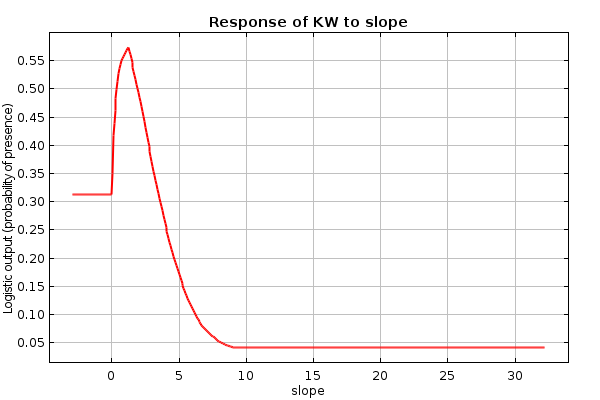 A map of Cornwall in Cornish

The Cornish Language Partnership has a list of placenames in Cornwall in the Cornish language.

I have downloaded a shapefile with locations of places from www.mapcruzin.com which ultimately derives from OpenStreetMap. To this I have added the Cornish placenames, and plotted on a map in QGIS.

I still need to add in other features like rivers etc., and find something to make sure that estuaries like the Fal are shown as water rather than appearing to be dry land.

The colour scheme might look familiar if you remember the old Bartholomews 1:100k maps. 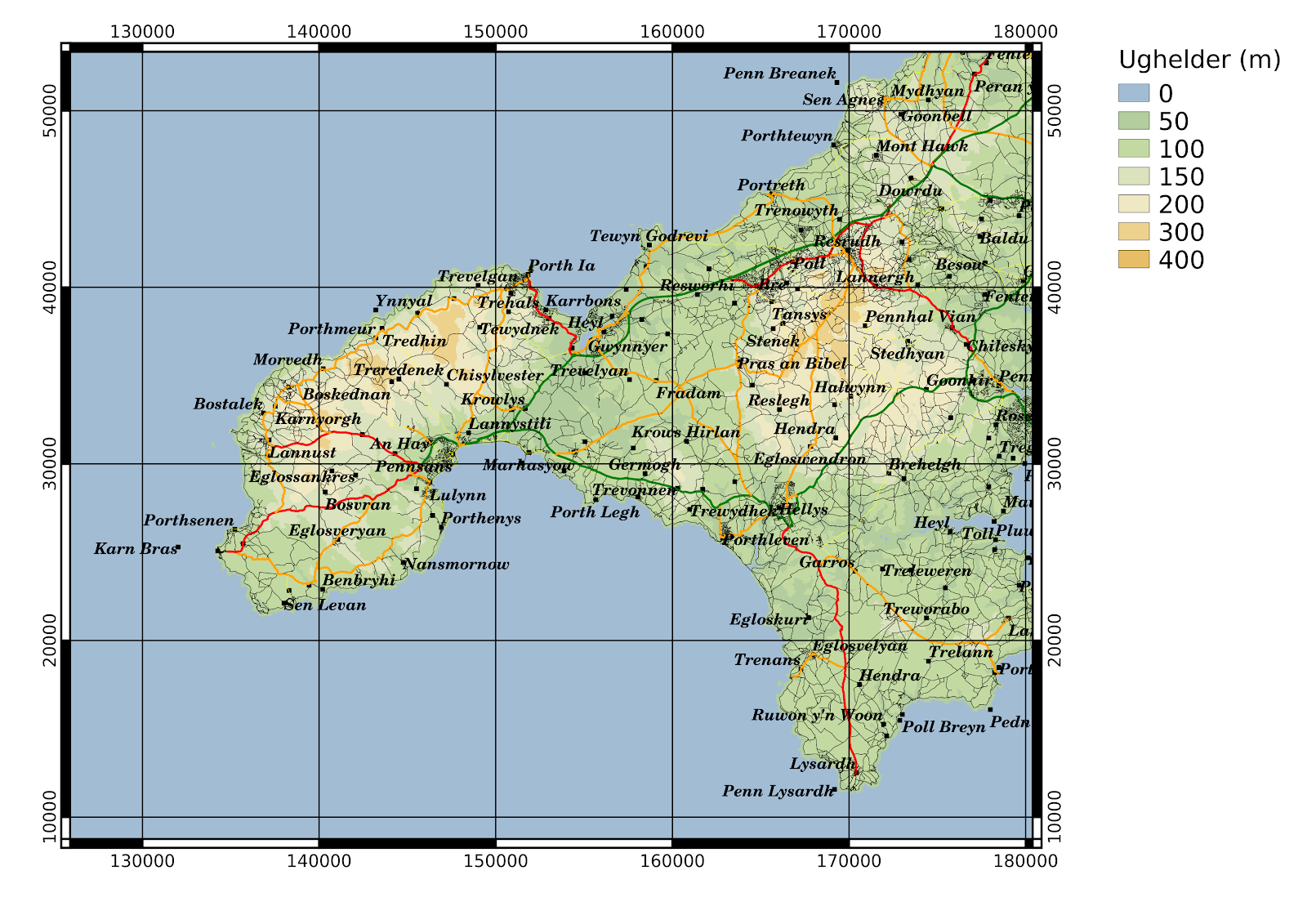 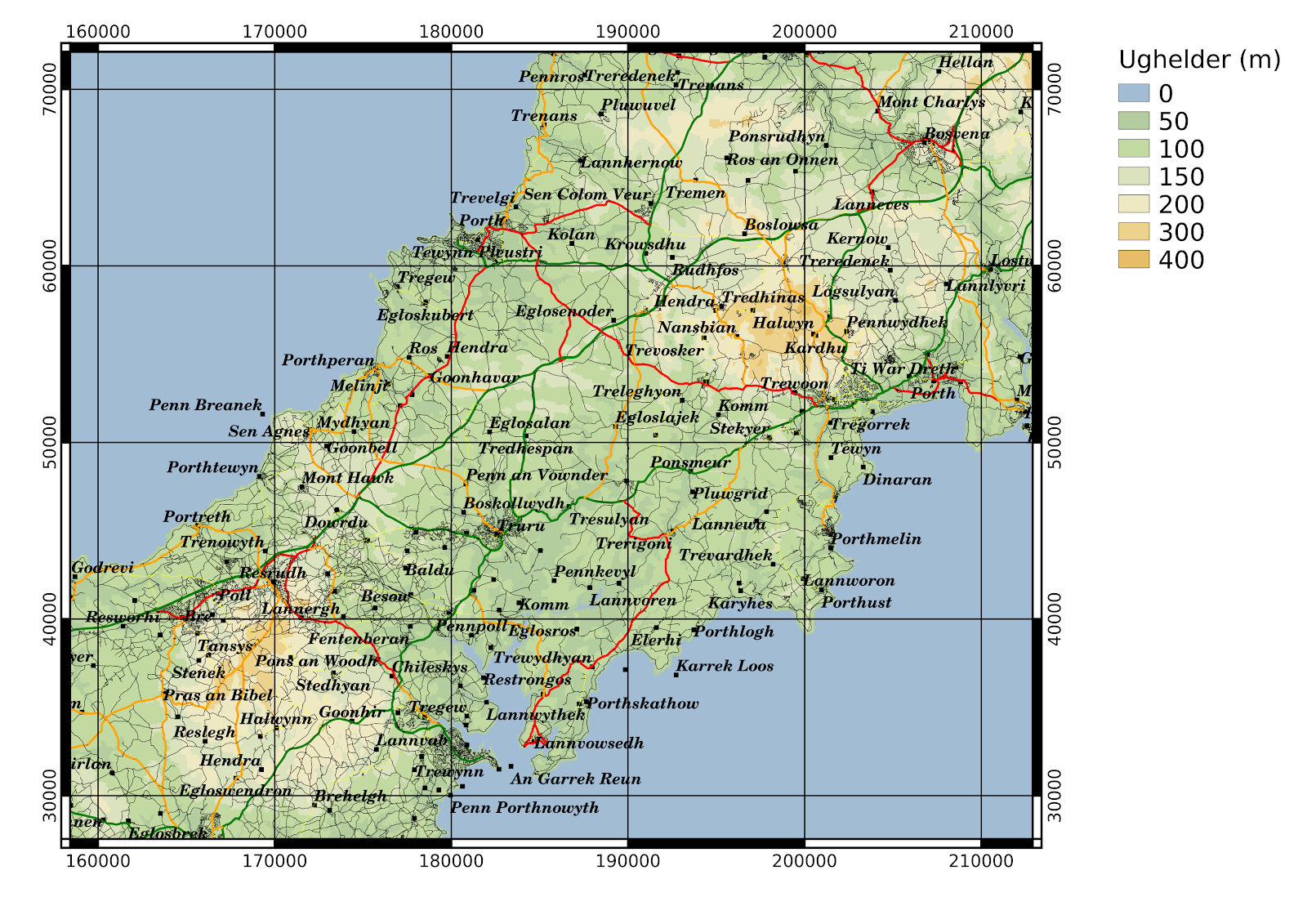 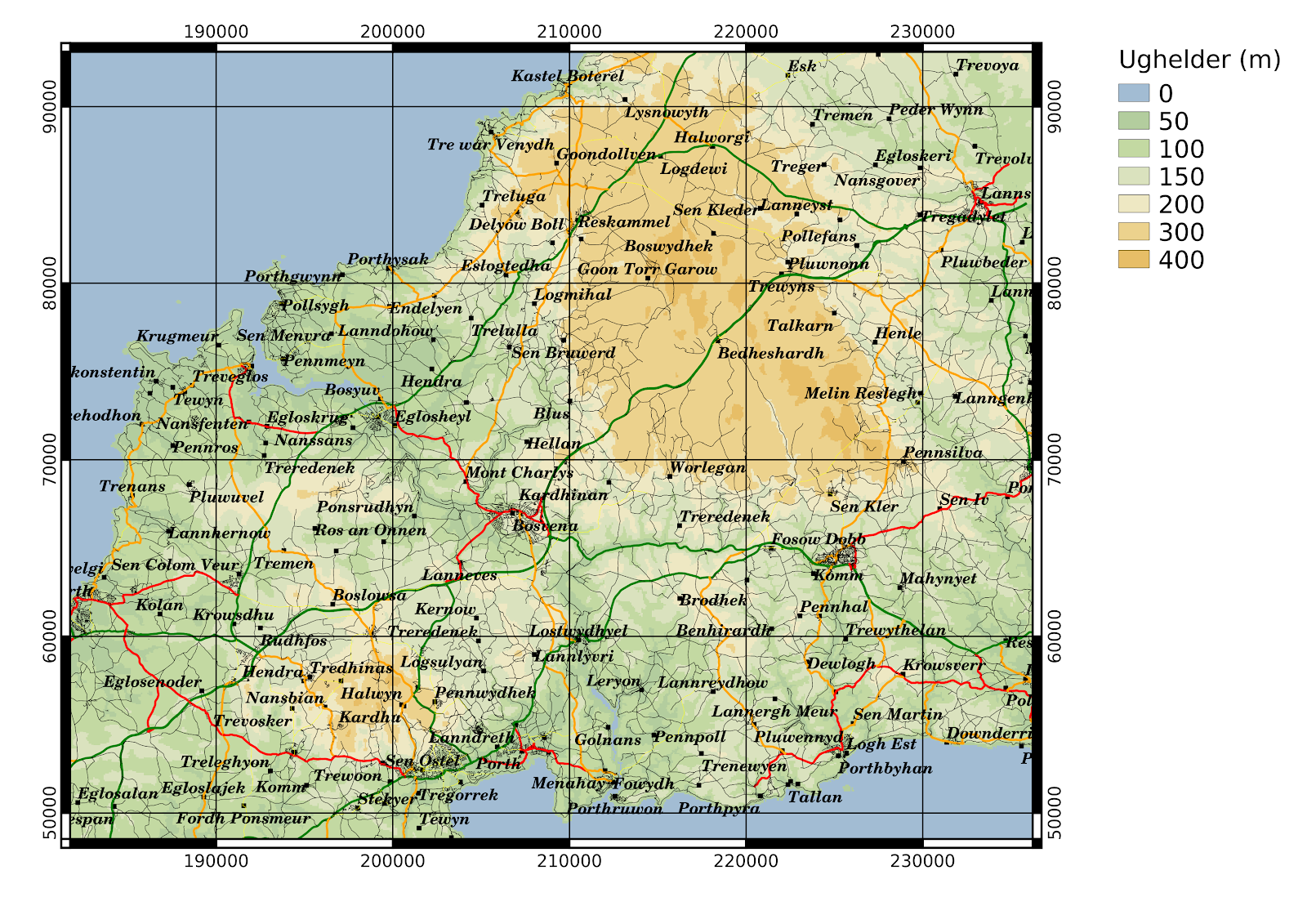 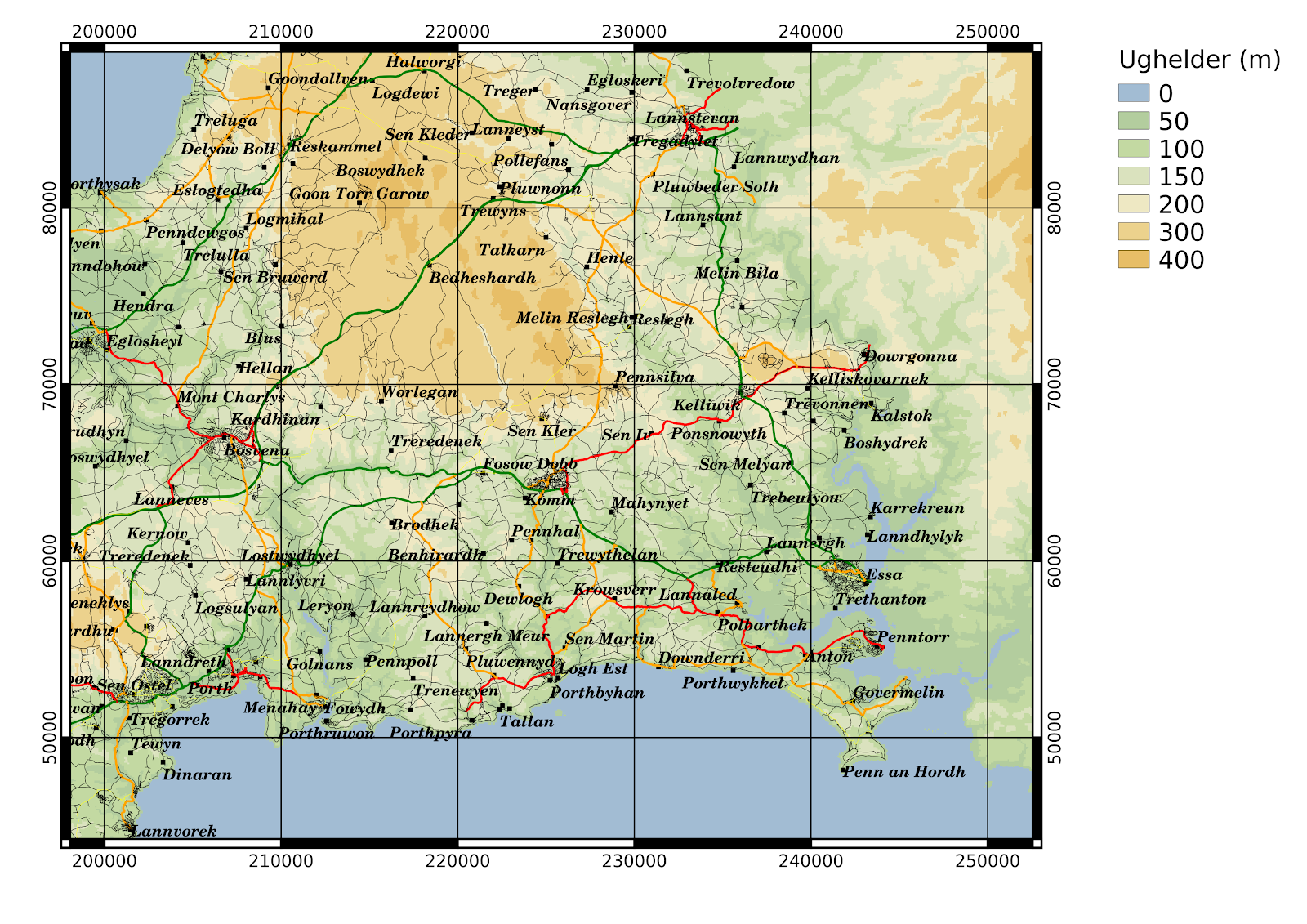 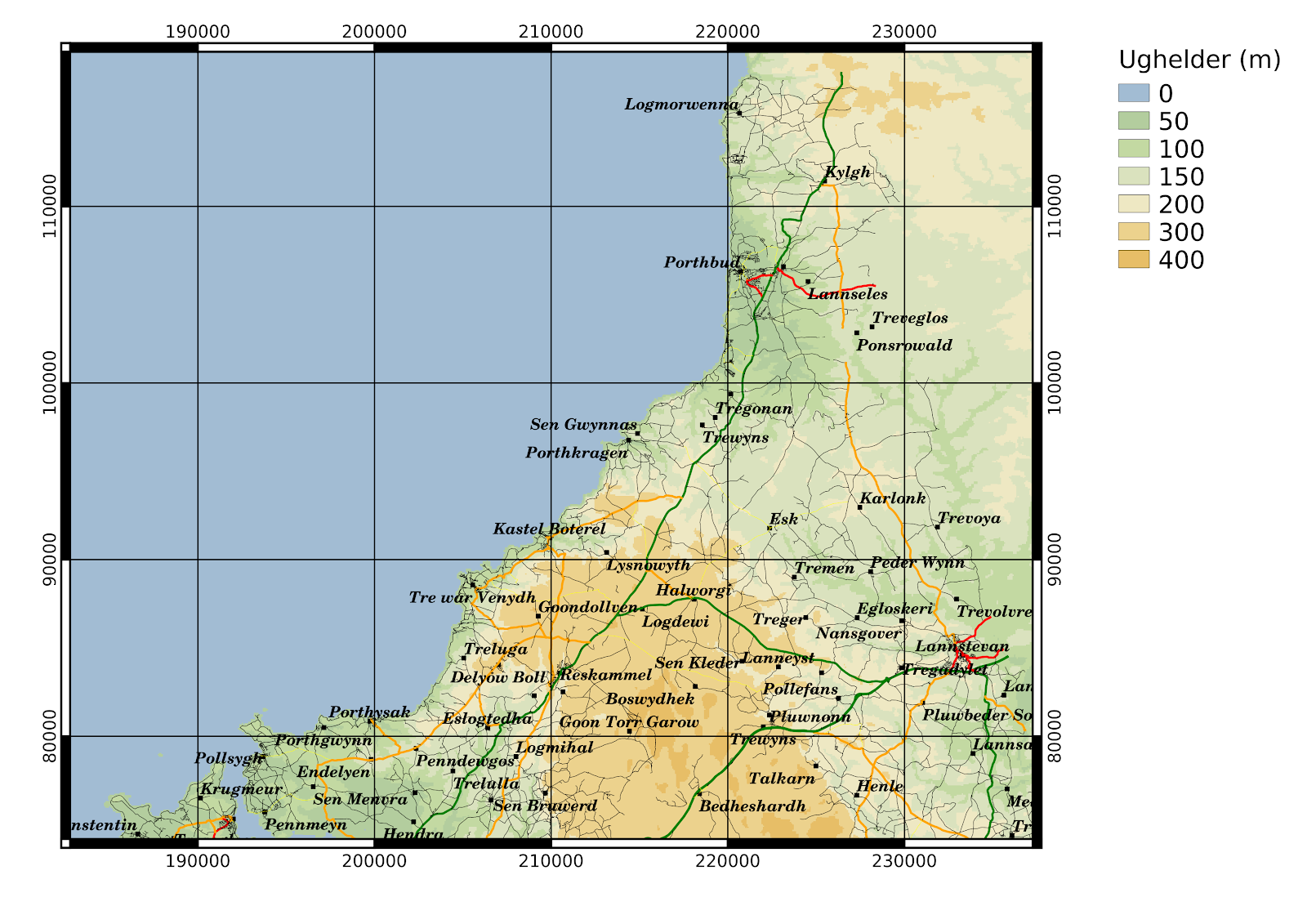 For some time now, I've had an idea to produce an elevation aware cycling route planner. You see, Google Maps can give you a route, but it doesn't take account of hills when deciding it.

Basically the idea I have is based on attaching some kind of cost distance multiplier to segments of route.

One idea I have had is to use the RSGISLib tools to segment a layerstacked digital elevation model, consisting on the elevation, slope, aspect (degrees from N) and then intersect this with a map of the road network (it is possible to download versions of this derived ultimately from OpenStreetMap and the OS OpenData has data available as well) to make road segments that have a consistent slope.

Then the average slope in the direction of the road could be calculated, and from this a cost-distance multiplier.

This is a segmented DEM in mid-Cornwall from the SRTM and with a pixel size of 73m, with a minimum object size of 9 pixels. 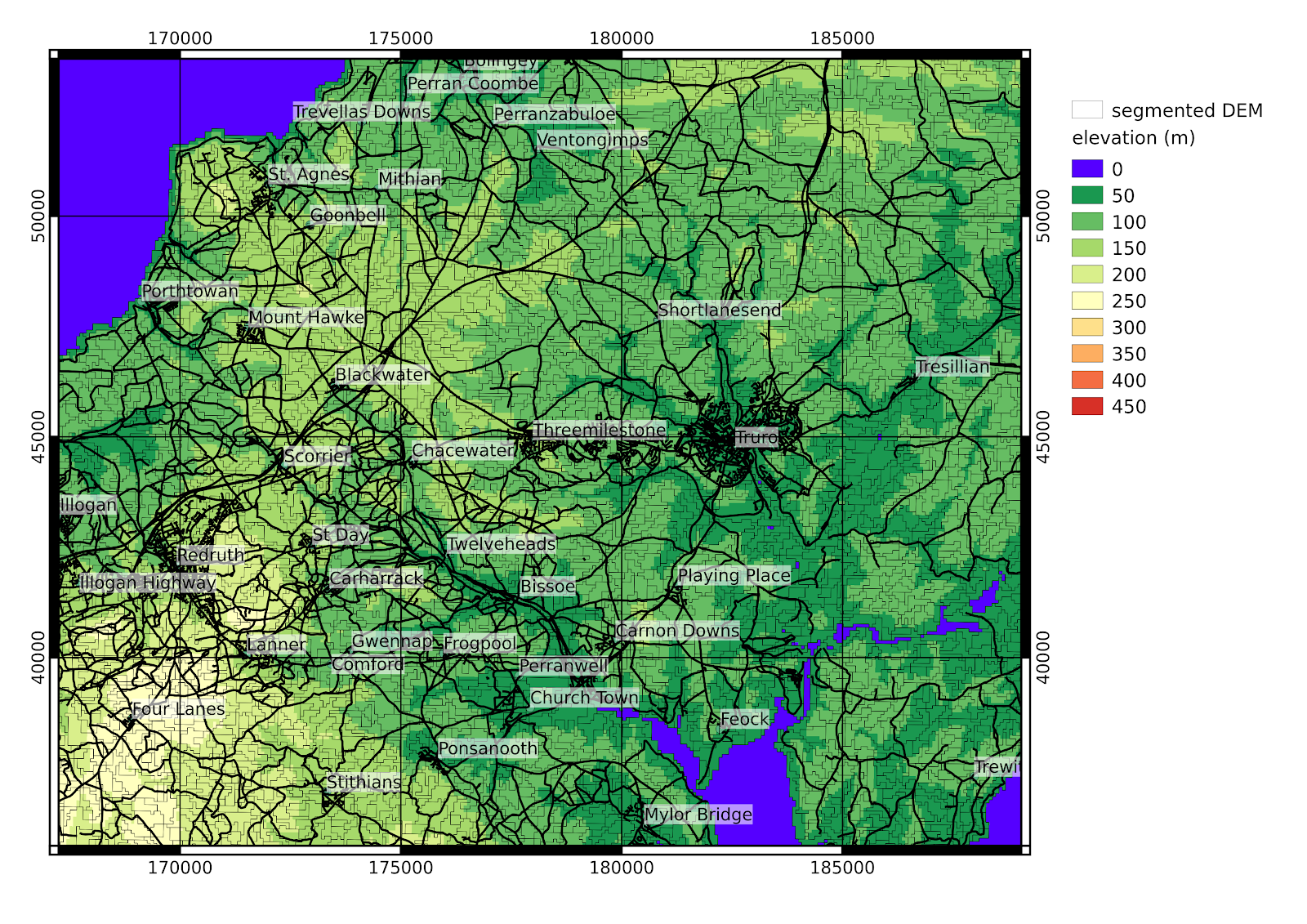 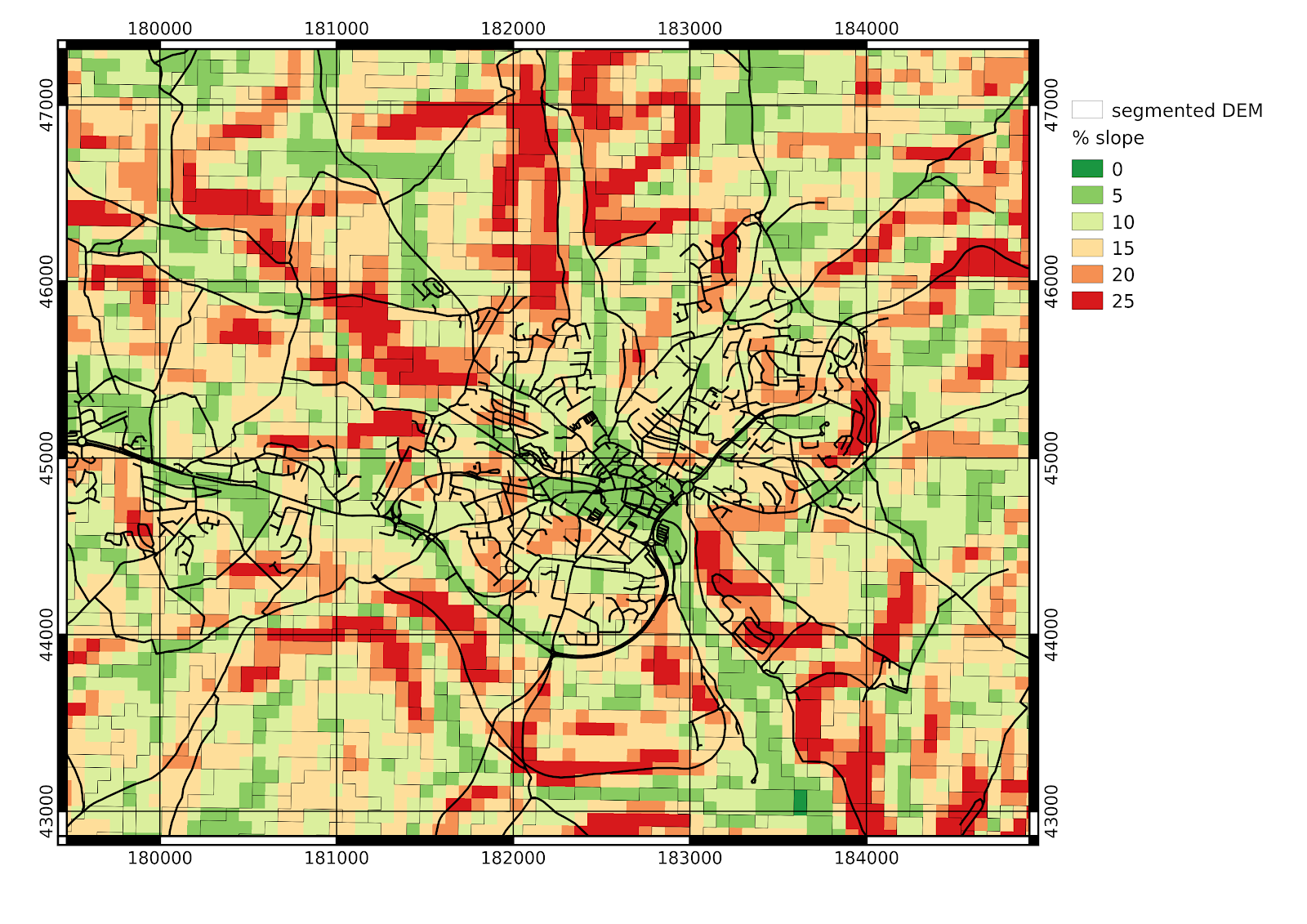 I haven't yet worked out how to complete this, one important thing is that the relevant slope is that in the direction of the road rather than the absolute value, and of course it is different if traversed in the reverse direction. So perhaps it would be necessary to convert every road into two one-way roads, so that the cost-distance could be calculated separately for each direction

The disappearence of Cantre'r Gwaelod 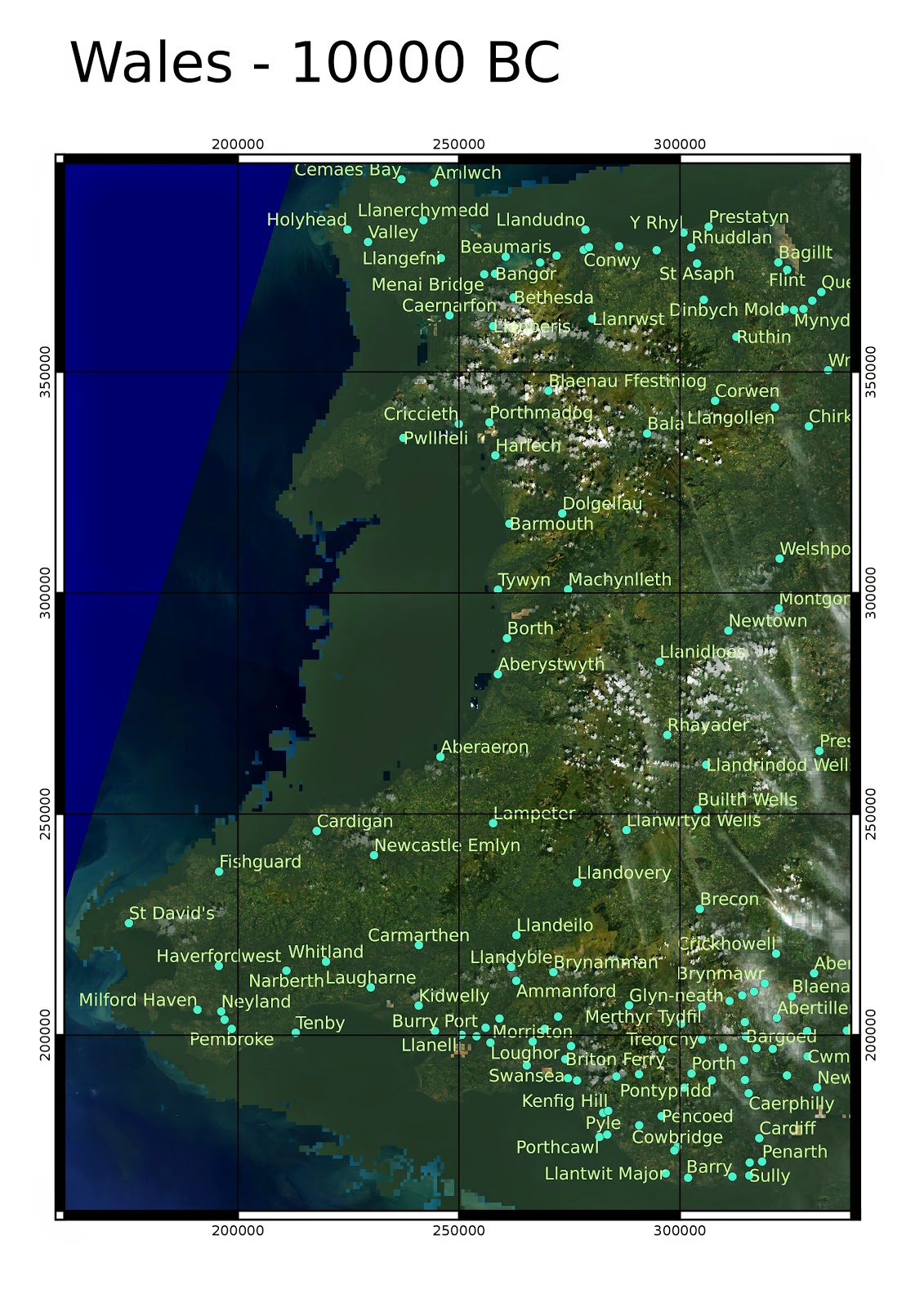 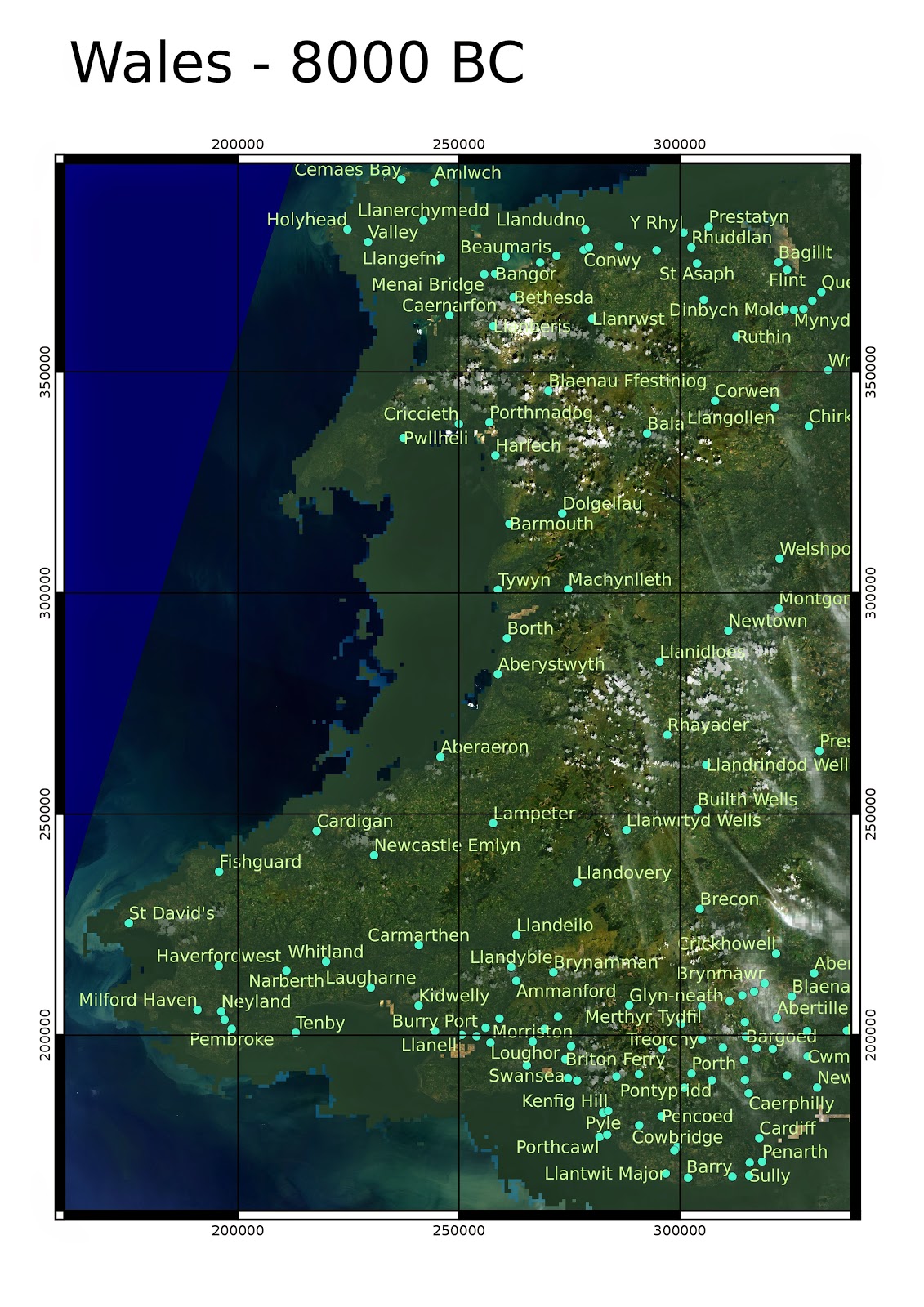 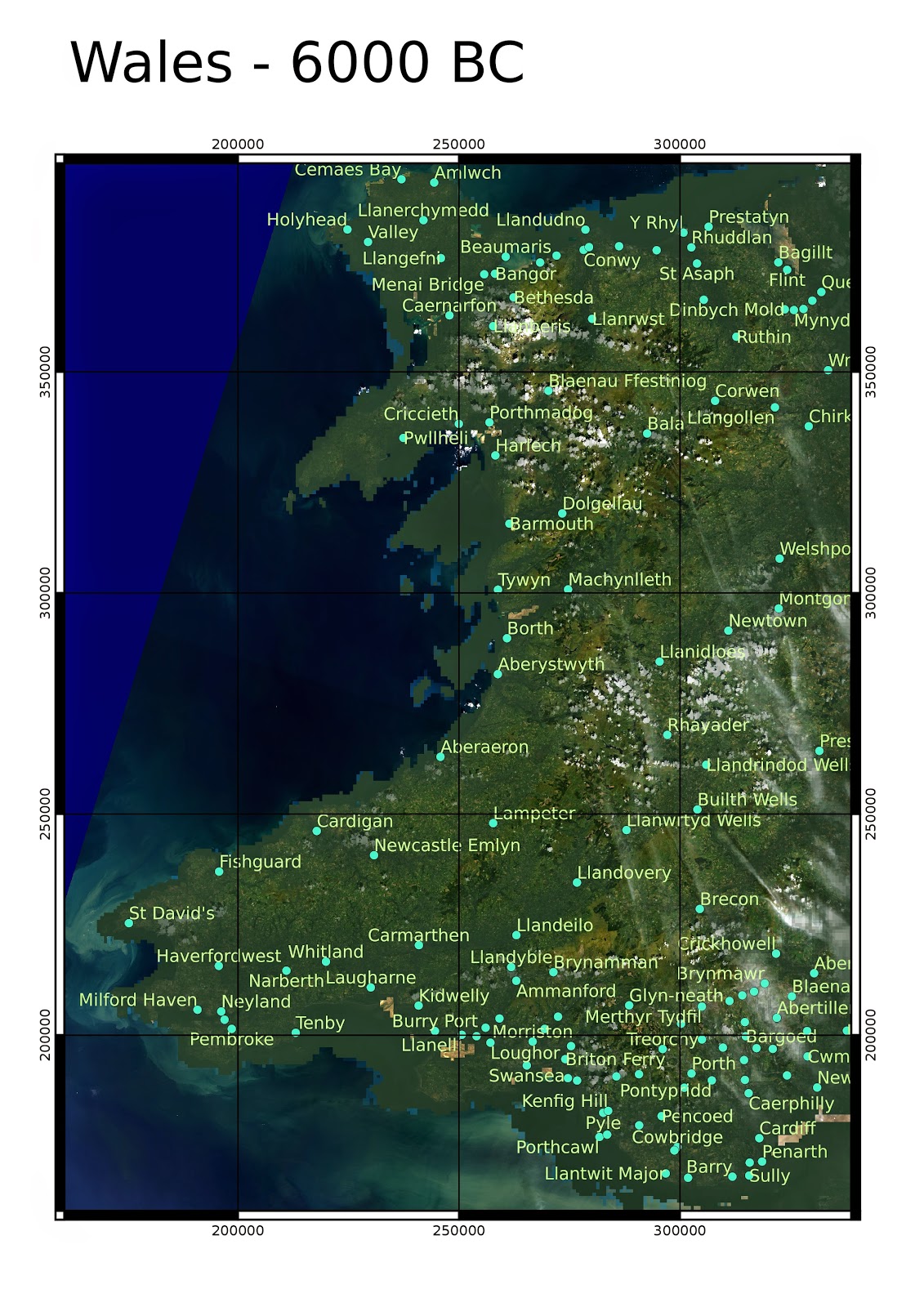 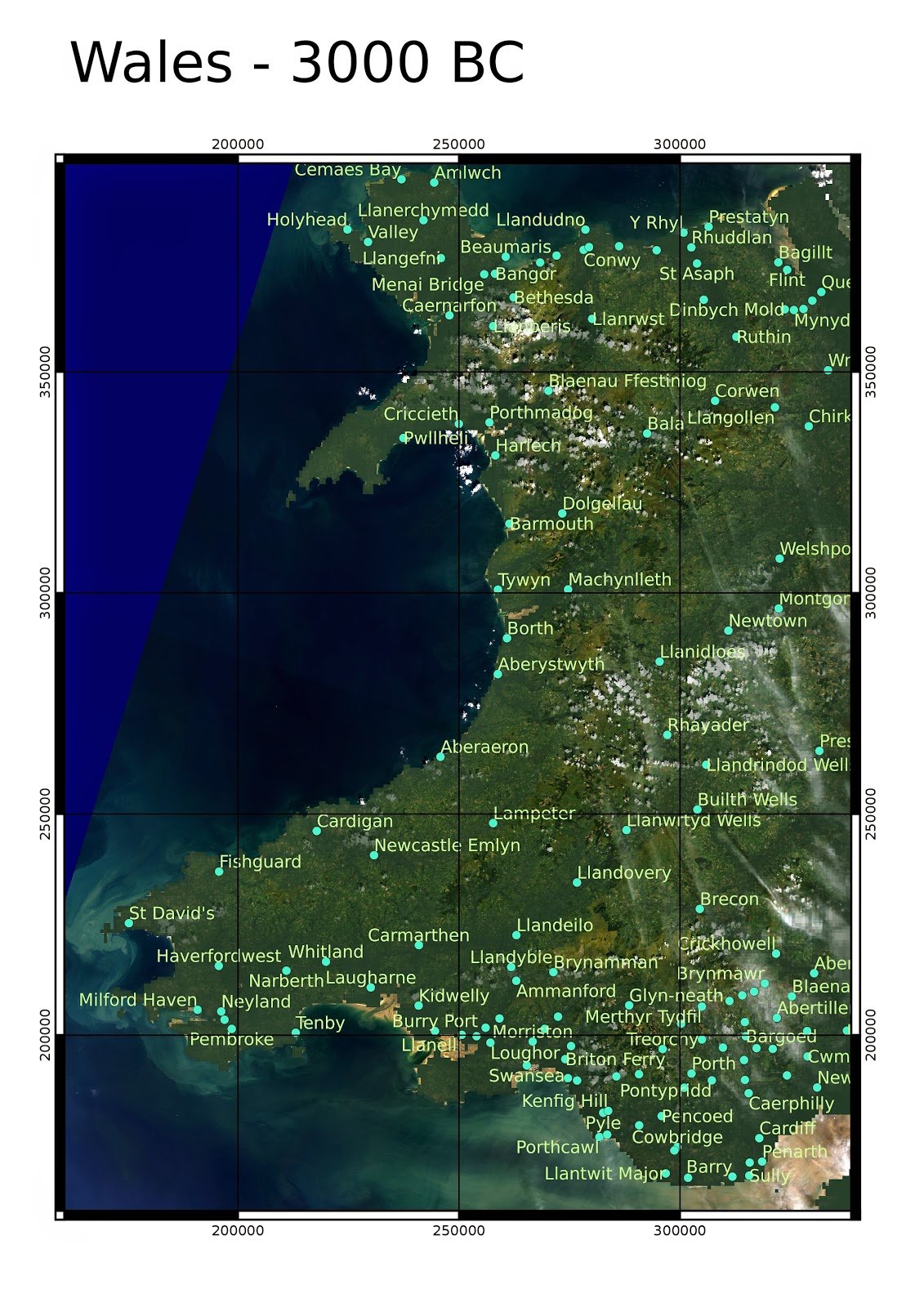