The lost land of Lyonesse

Sea level is based on Shennan and Horton 2002, with a triangular interpolation. Background is Landsat 8 from 25th July 2014. OSGB numerical coordinates.

The bathymetry is from GEBCO which has a 30 arcsecond resolution (about 600m at 50 degrees latitude). Higher resolution bathymetry is now available from the INSPIRE portal. I am planning to make some more detailed maps with this.

I've not removed man made structures including reservoirs and china clay pits. I have added a little semi-transparent dark green colour in the lower elevations to simulate dense forest in the valleys which is thought to have been the case in the Neolithic.

The Cornish name for St. Michael's Mount, is "Karrek Loos y'n Koos" - "The Grey Rock in the Wood". 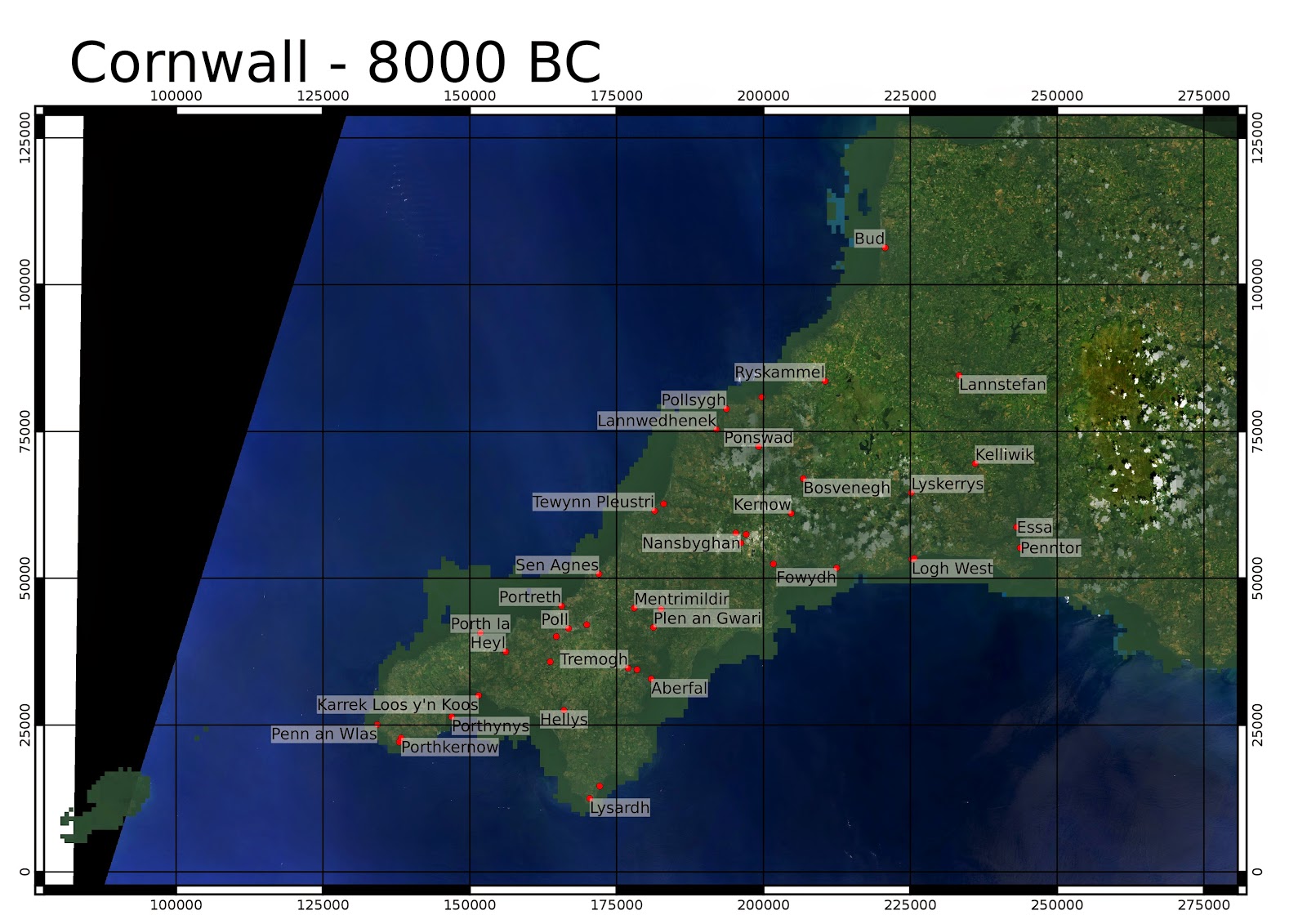 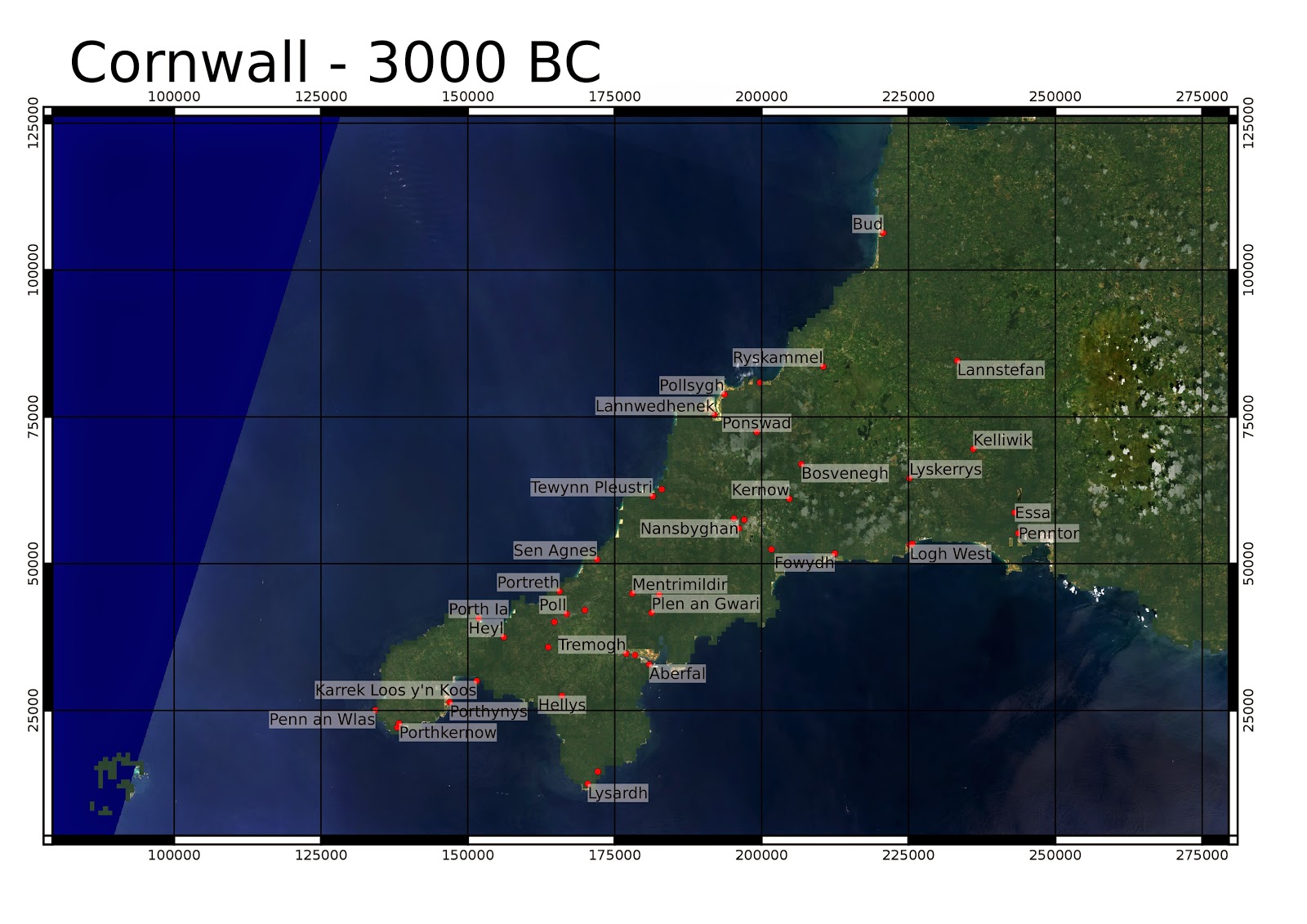 Dissertation done, and the likelihood of Martian glaciers in Cornwall, Wales and south-west England

So, the dissertation is done now, you can get a copy here, or a special tablet-optimised version here. The latter is using the US Supreme Court's paper size and Century Schoolbook font, as was advised to me by http://en.wikibooks.org/wiki/LaTeX/Page_Layout.

In the dissertation itself, I explain that the Martian terrain is segmented using RSGISLib and a classifier function assigned to the segments using the Souness et al. 2012 glacier-like forms as a guide.

So what if we apply it to a terrain that is not on Mars? The Shuttle Radar Topographic Mission data is available at a similar resolution to that from HRSC for Mars.

I have done the segmentation for areas of Wales, Cornwall and the southwest of England using topography only rather than integrating the red image field, since it wouldn't really be comparable with all the vegetation etc. on the Earth.

Since Wales generally has a higher likelihood of martian glaciers, I have used a slightly different scaling with only starting to highlight at log(K) > 13: 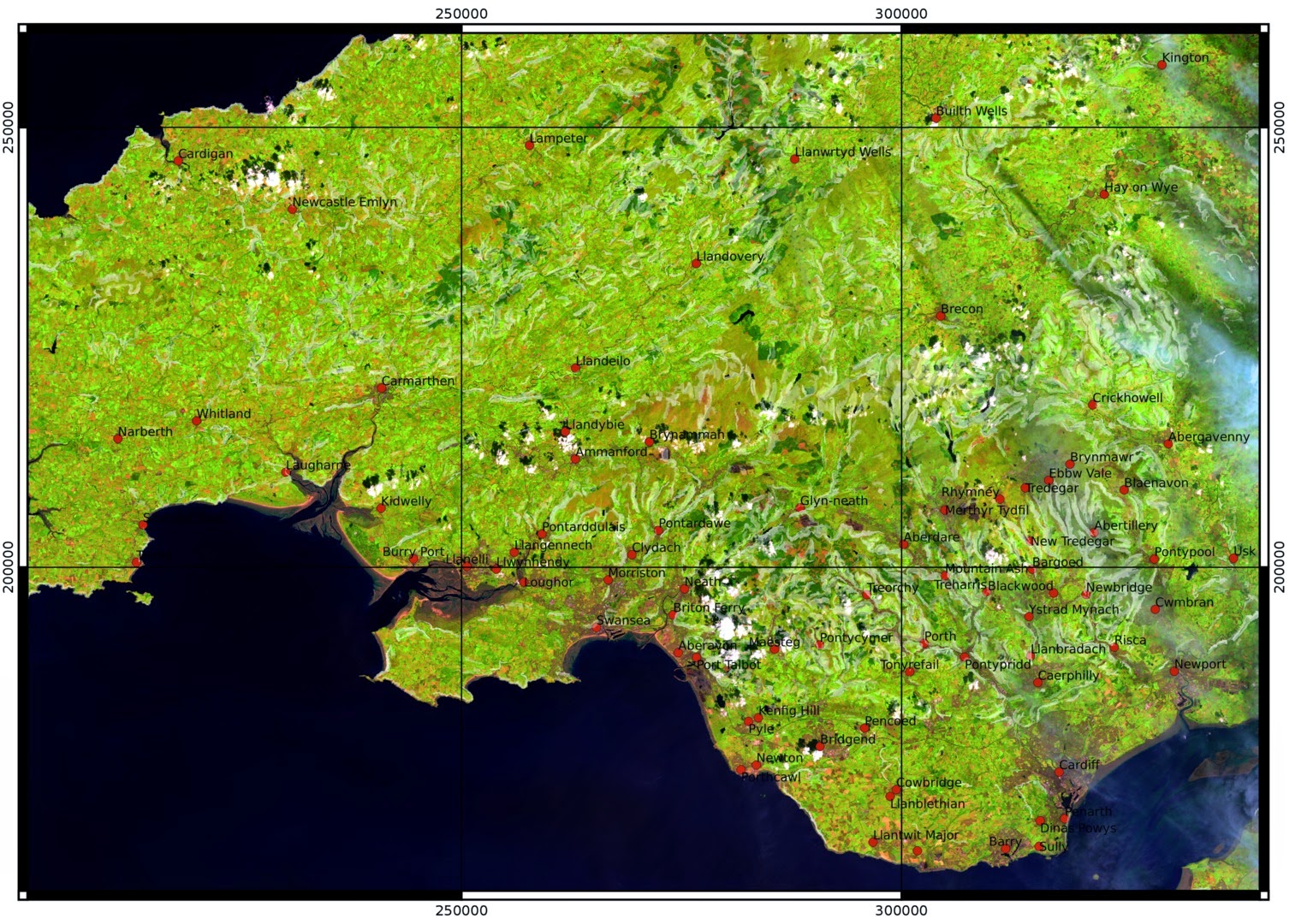 A close up of the Valleys and Brecon Beacons: 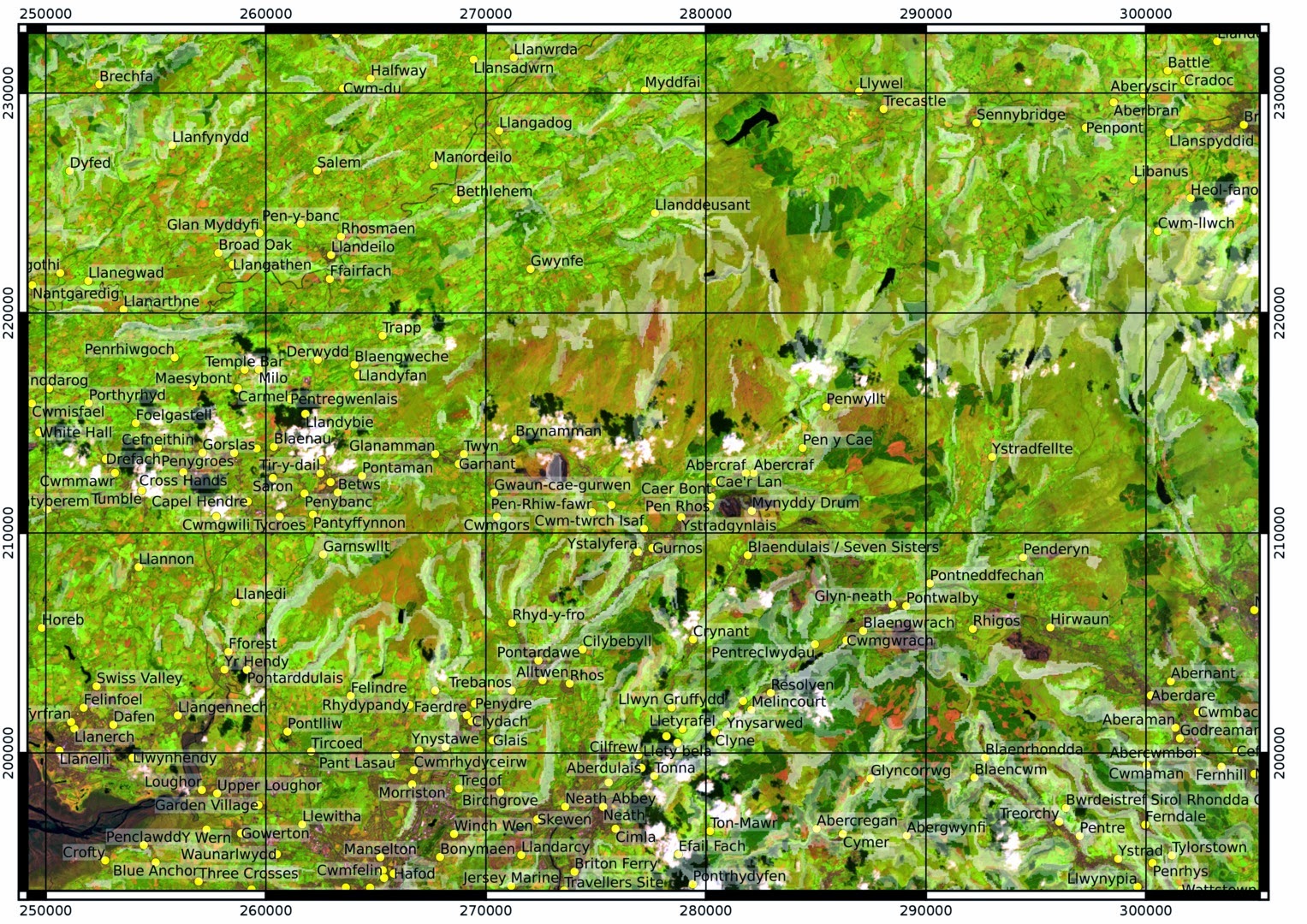 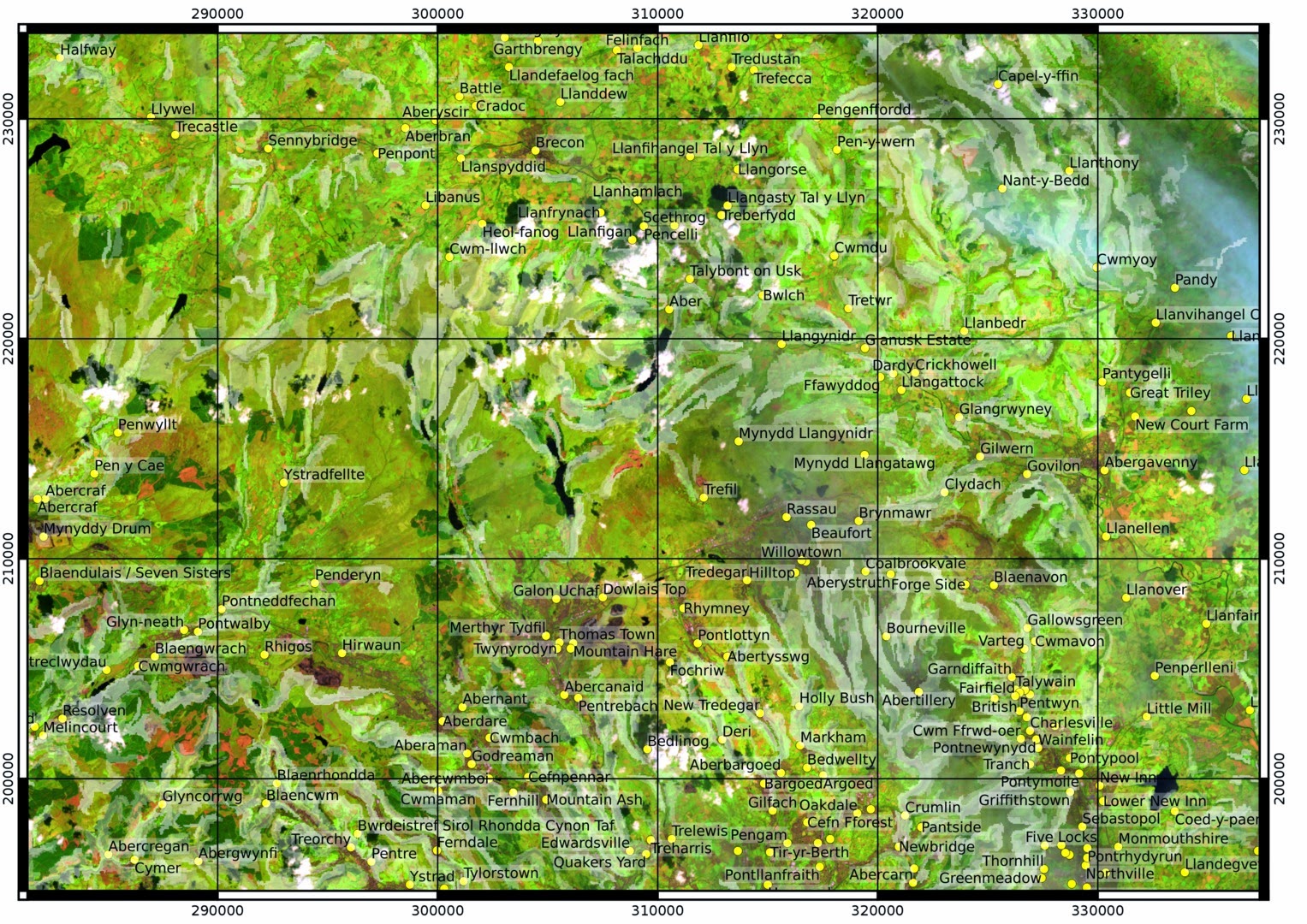 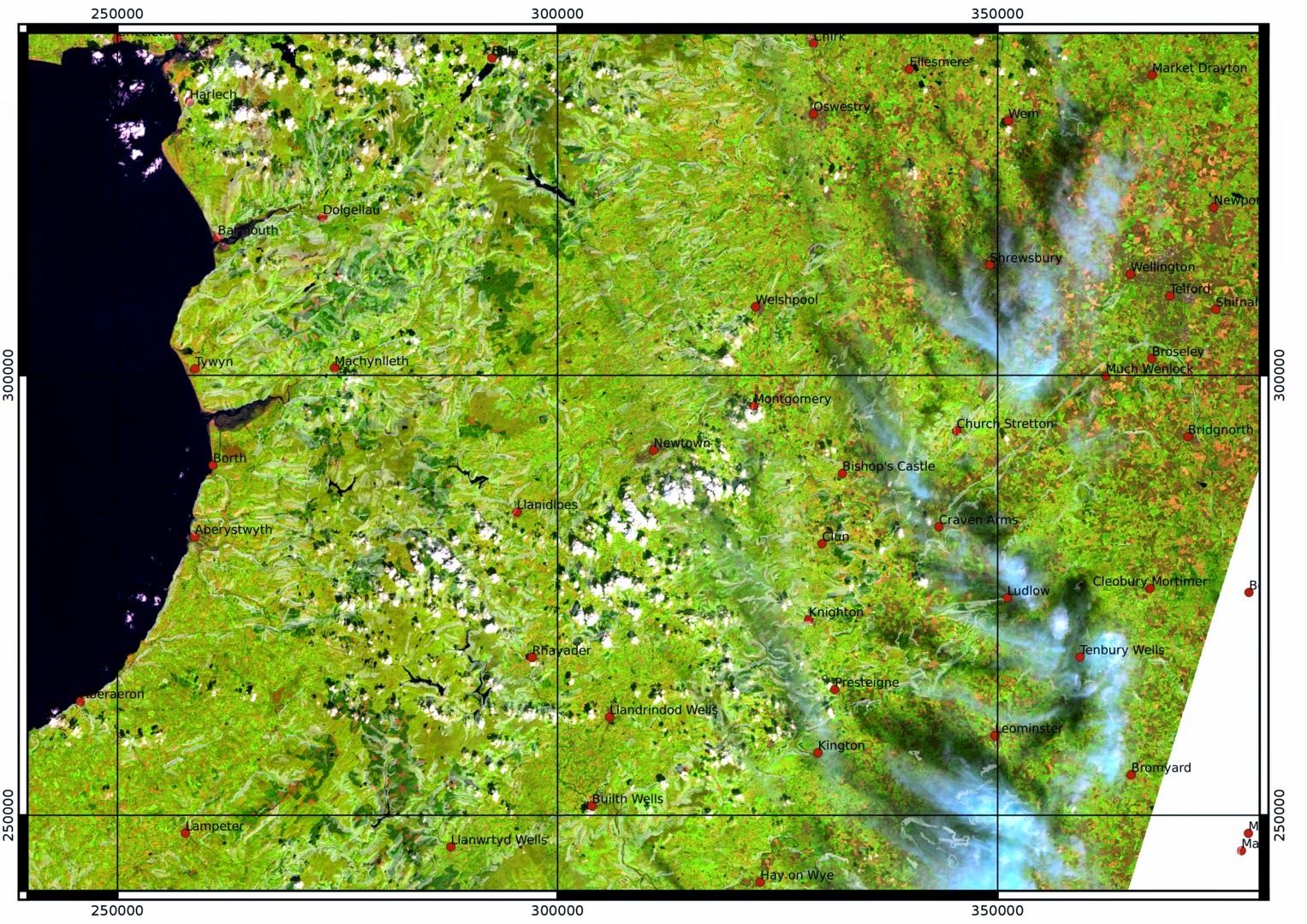 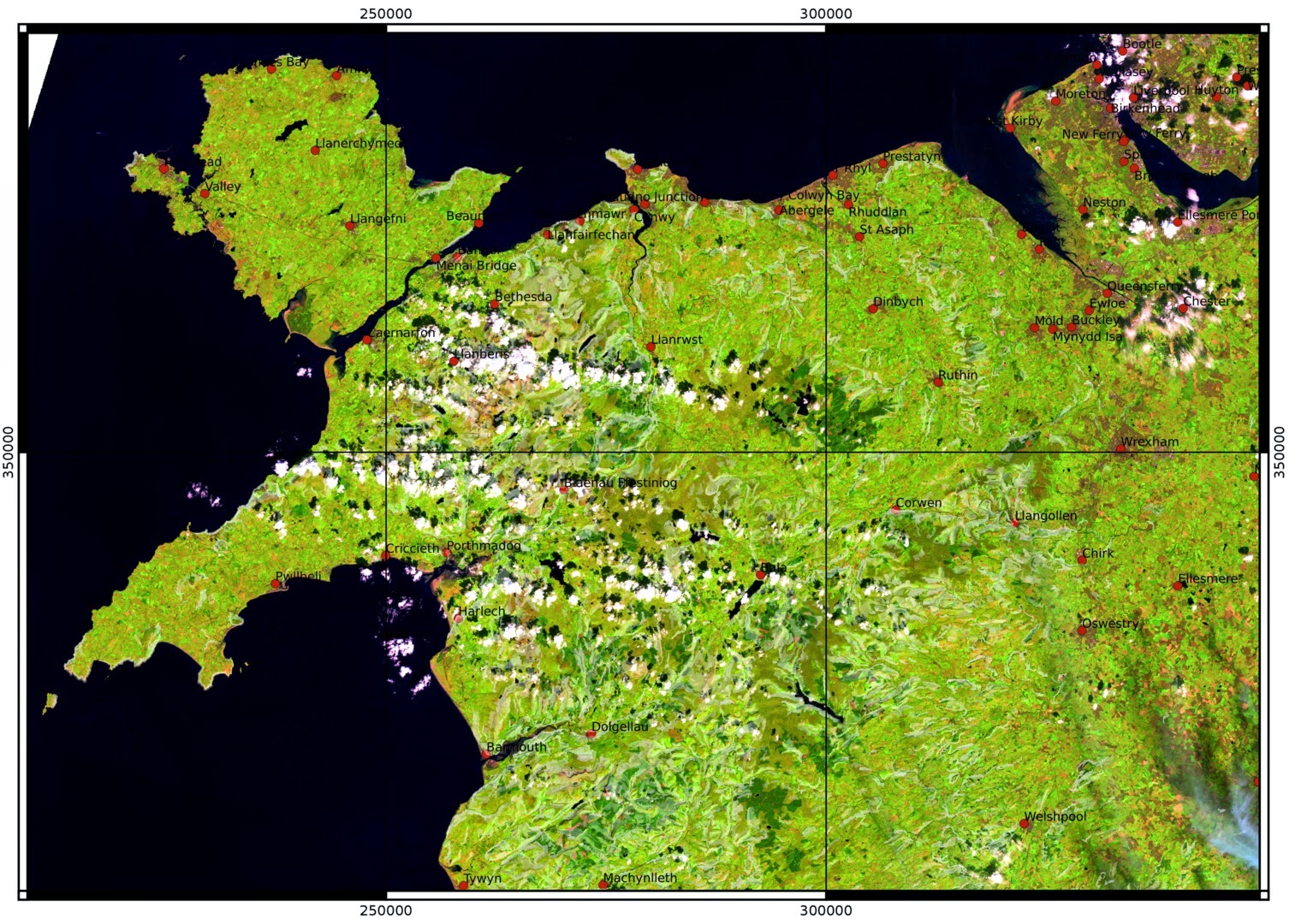 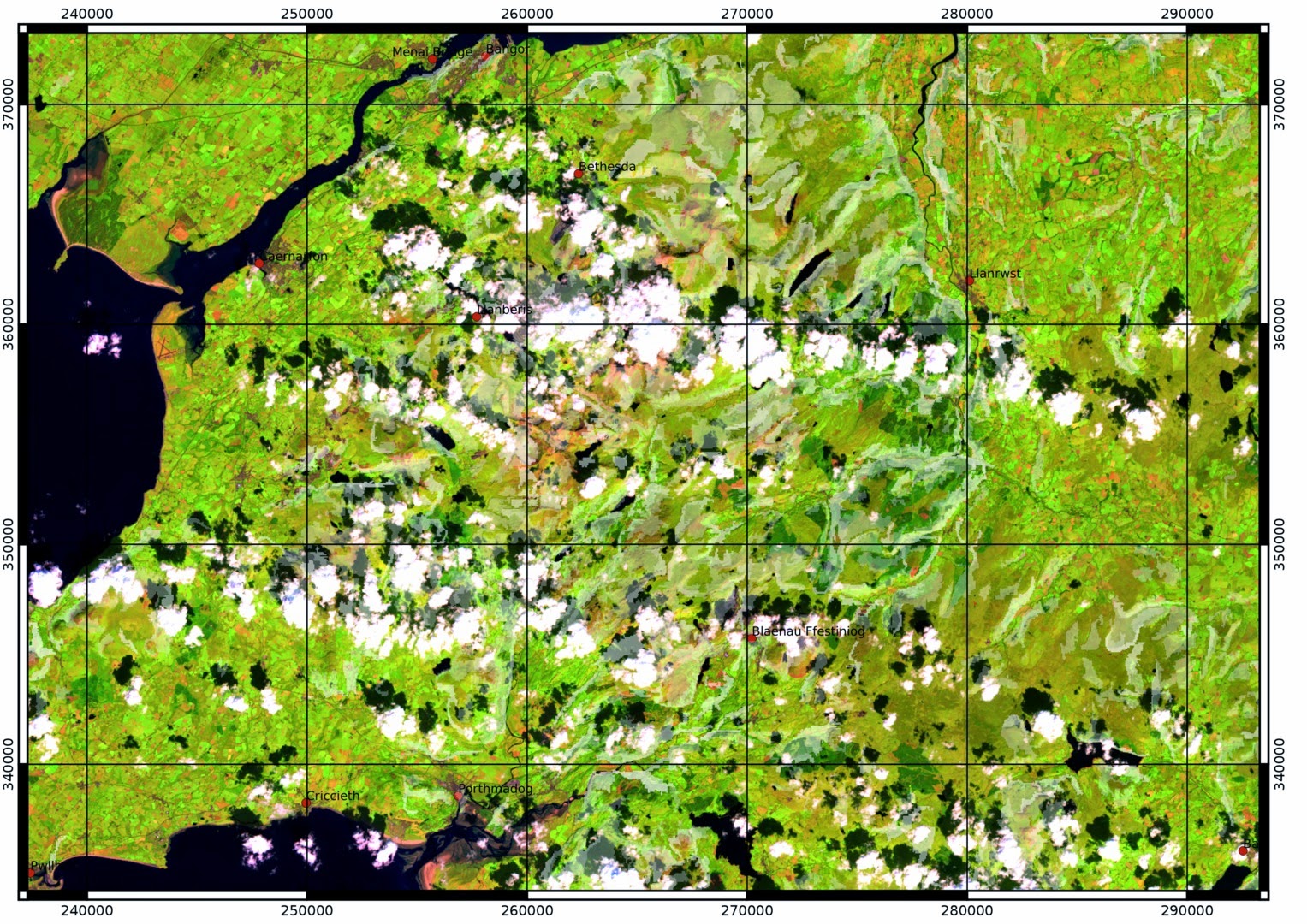 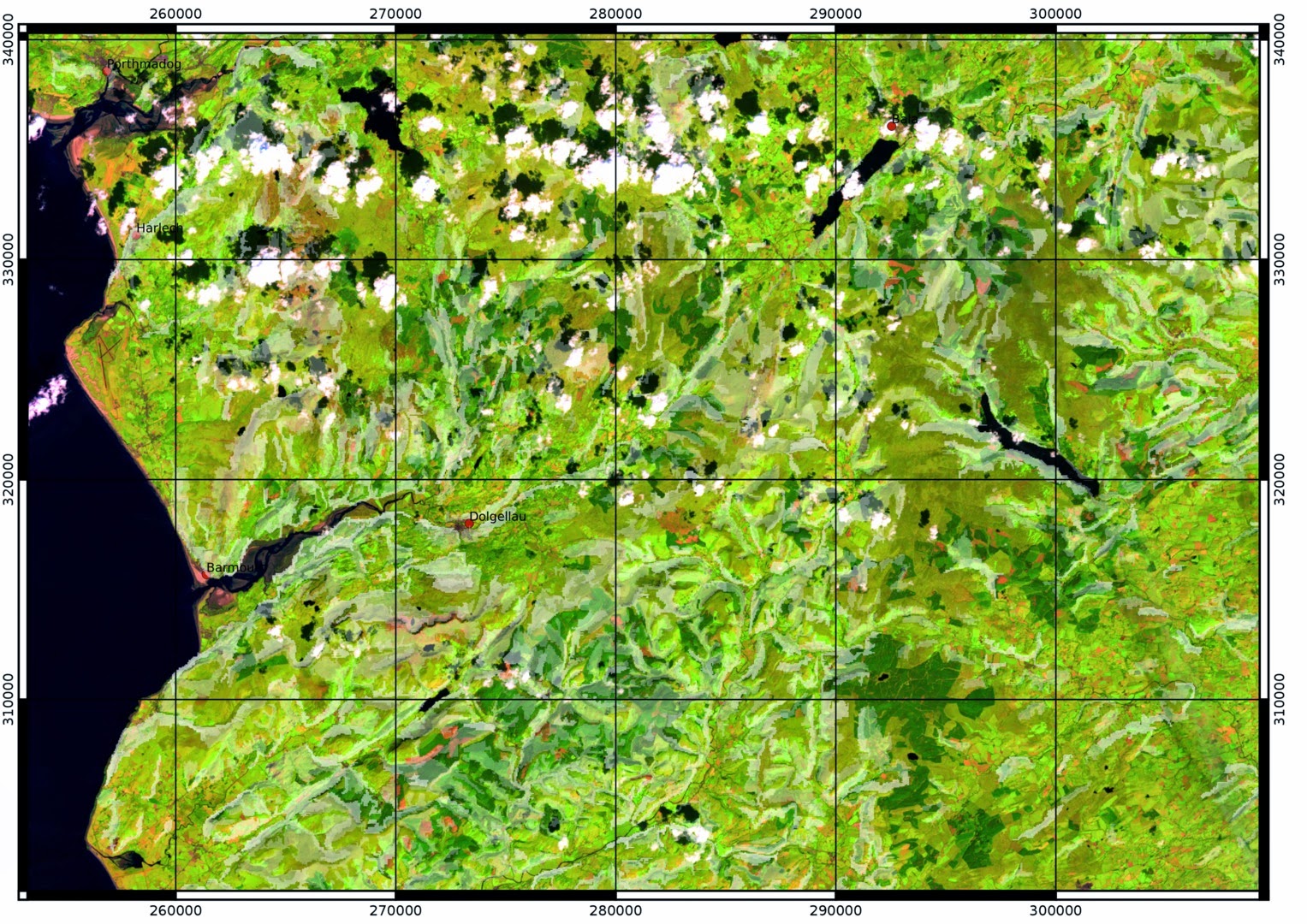 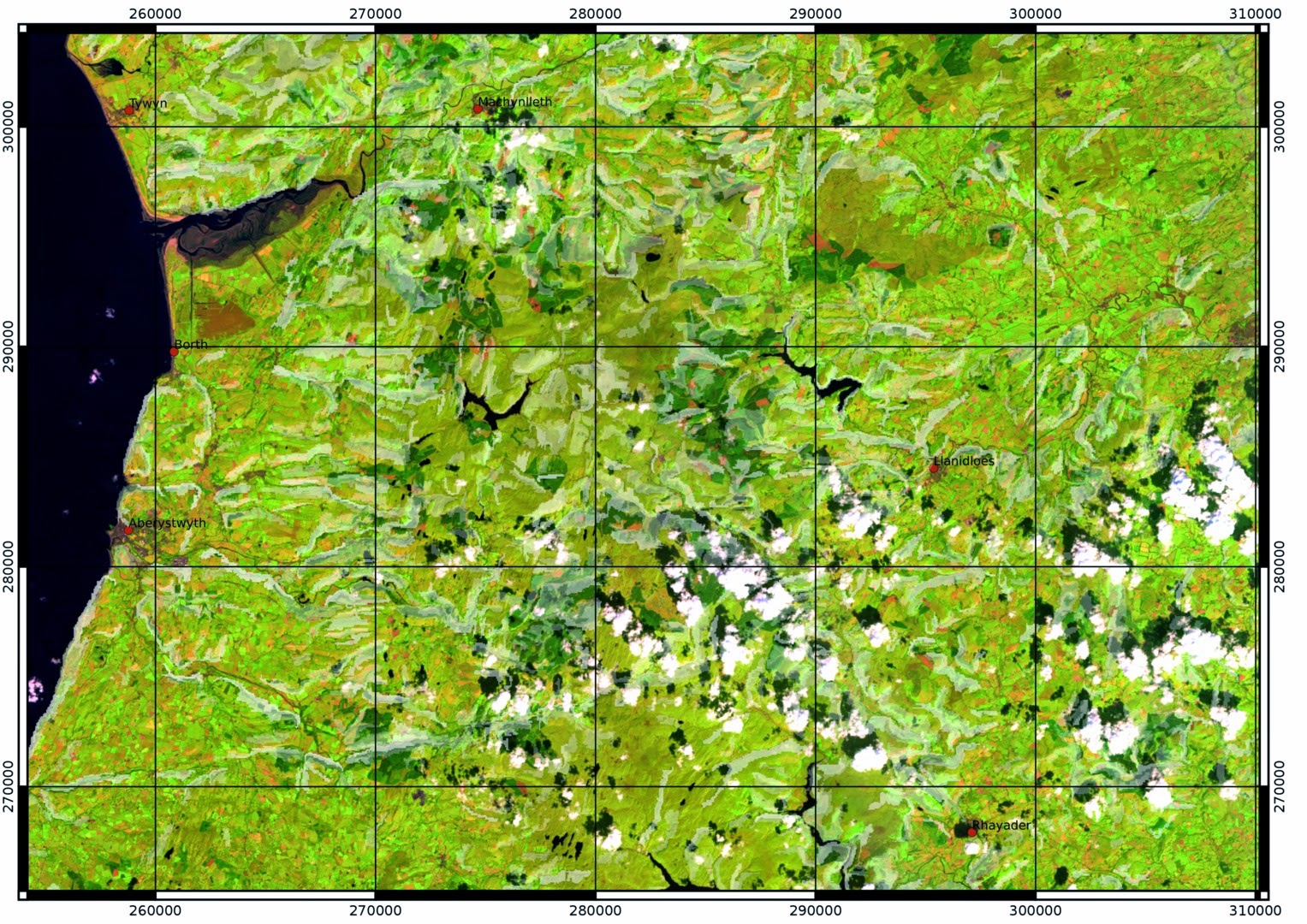 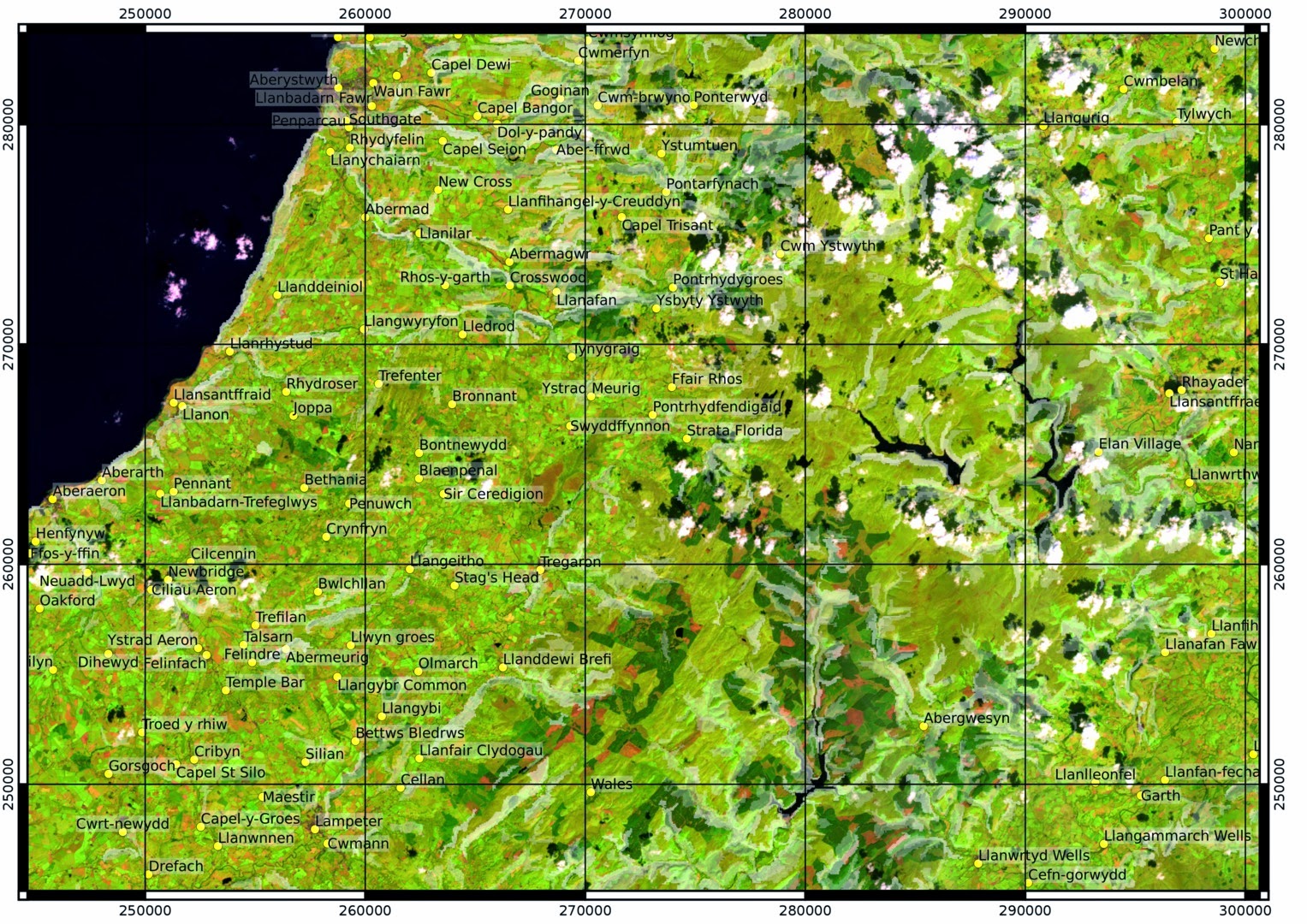 So now I've (almost) finished writing my dissertation, I'm putting in the various figures. I'm mainly using QGIS for this, most of the time the map composition feels more intuitive than ArcMap.

My previous post showed a three colour composite of showing image (or an aspect layer), elevation and slope, but I think that can be difficult to interpret, becasue a steep slope would either be blue, cyan, or magenta or white depending on what else is in the other layers.

So I'll be doing pseudocolour like this, using an image layer underlaid using transparency. I'm using meters in an Equicylindrical projection with 40 degrees latitude parallel. I think its nice to have metres as units for figures of individual objects/tiles, but maybe lat/long would work better for larger summary plots?

This is one of the areas I'm focusing analysis of the results for the dissertation. There are two tiles with 50m HRSC topography, and other tiles available at 75m, including the well-studied Crater Greg. 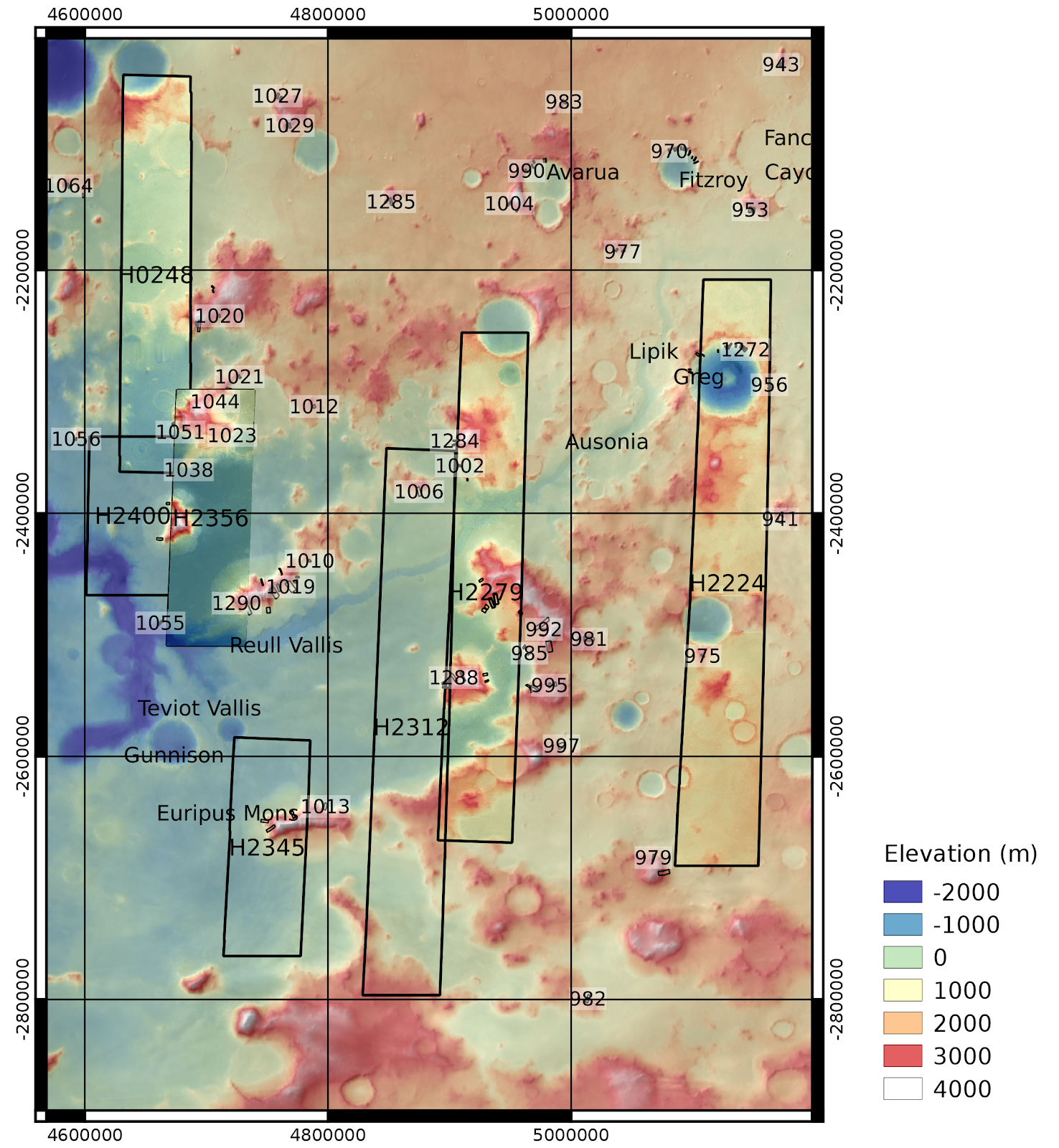 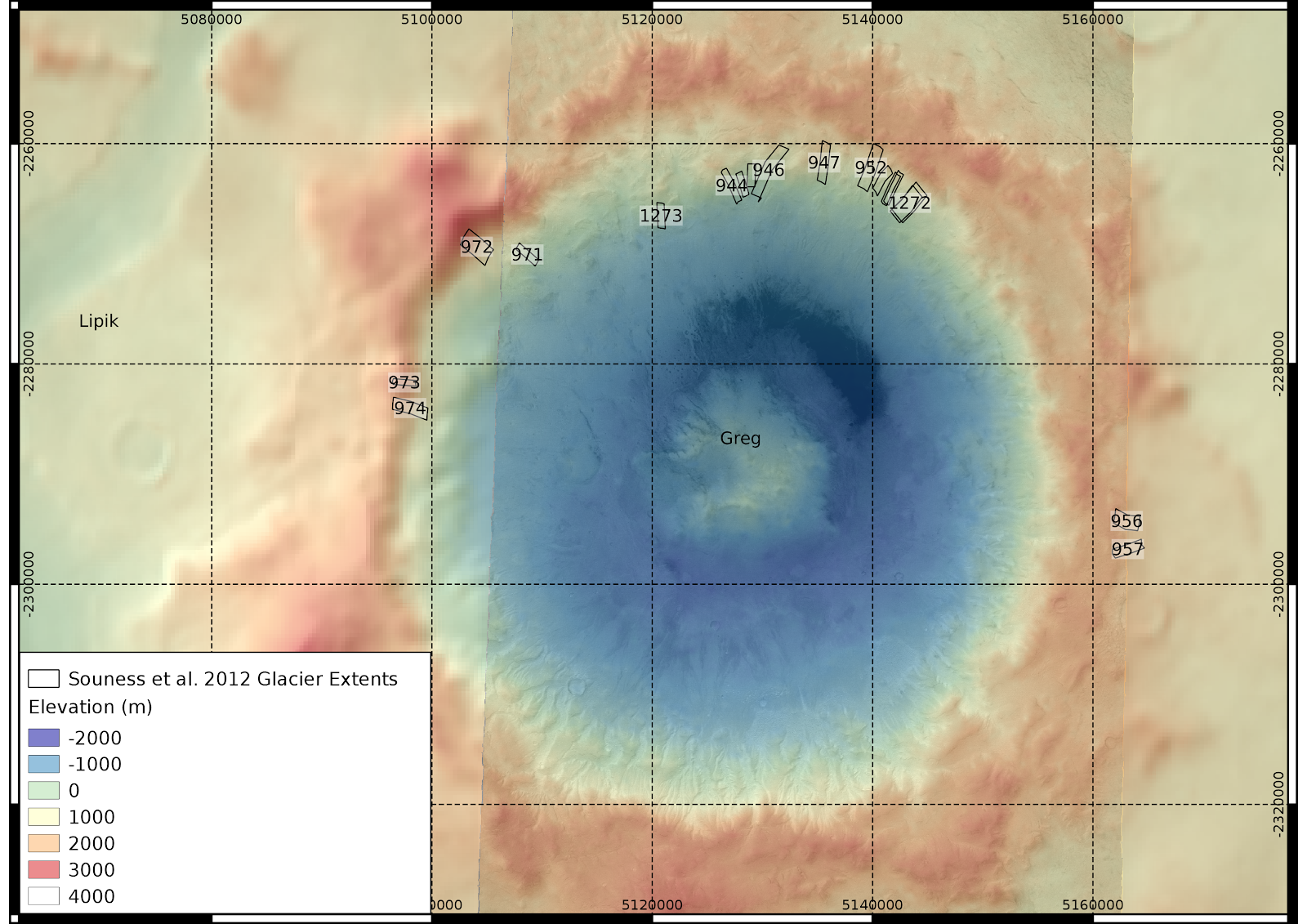 I'm using a single colour ramp for slope at the moment, I think this is probably clearer than a spectral pattern. 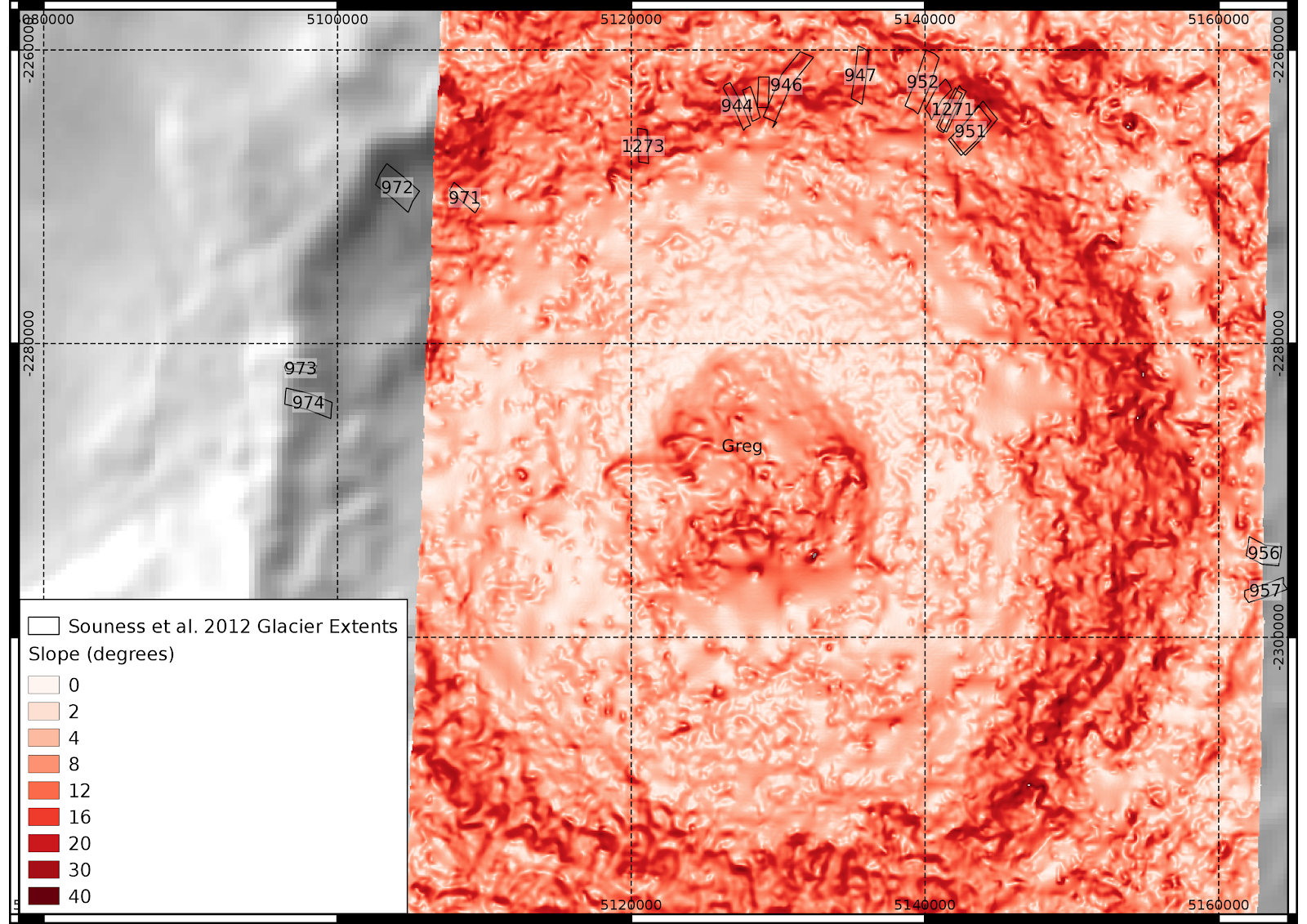 I wasn't sure which colour scheme to do this in, given they can be both positive and negative, but purple/green seems to be alright, as long as its clear which is positive. An overview of glaciers in the mid-latitudes of Mars

The paper by Colin Souness et al. in 2012 (link) gave an inventory of Martian "Glacier-like forms"

Here is where they are found plotted on a layerstack of Mars Express HRSC DTM tiles, where red=nadir image, green = elevation, and blue = slope, falling back to MOLA topography in areas I don't have that tile because it didn't underlay any Souness GLFs. For MOLA I use aspect as a substitute for the image layer.

The Souness GLFs are numbered, but not all are plotted because QGIS automatically avoids plotting too many labels on top of each other.

The coordinates are Mars Equicylindrical, with a standard parallell of 40 degrees. I had some trouble with geomorphons, because I couldn't get the GRASS 7 extension to compile in Linux for unclear reasons, so I was limited to using the Windows version inside a virtual machine, and it decided to crash when presented with Mars data, although it was OK with Earth DTMs...

I have however been using LandSerf to generate curvature layers, and a feature classification, so here we are, for the well known (at least to Martian glaciologists) crater "Greg":

I hope you're not too confused by the use of transparency...

Units are in metres. 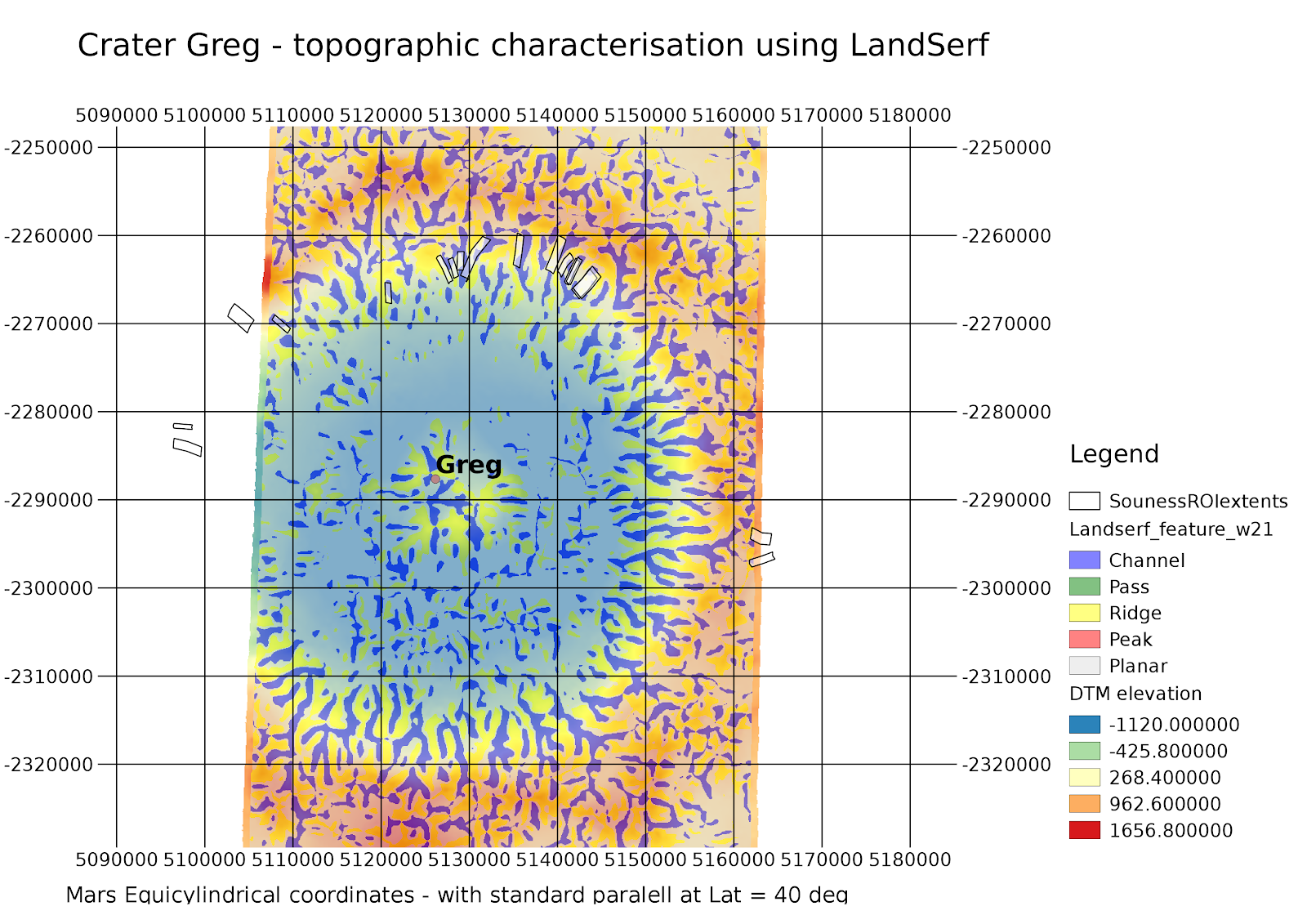 Some of the glaciers form a channel as they are constrained by topography, but not all channels are glaciers.....

Using longitudinal curvature calculated in LandSerf, showing negative curvature where a slope starts off steep and shallows as it goes down, which the Martian glaciers in Greg and elsewhere generally do, (Bryn Hubbard et al.): 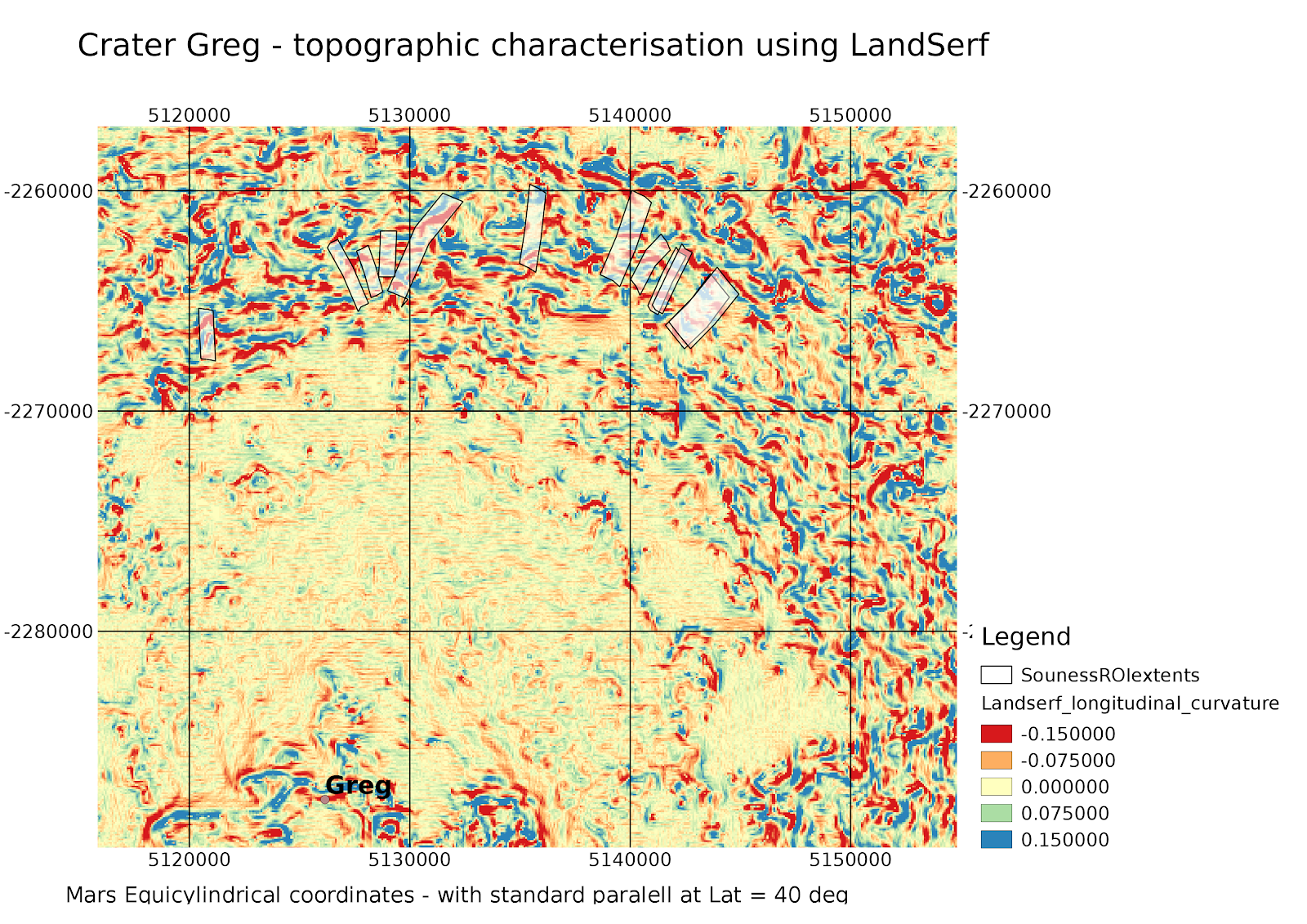 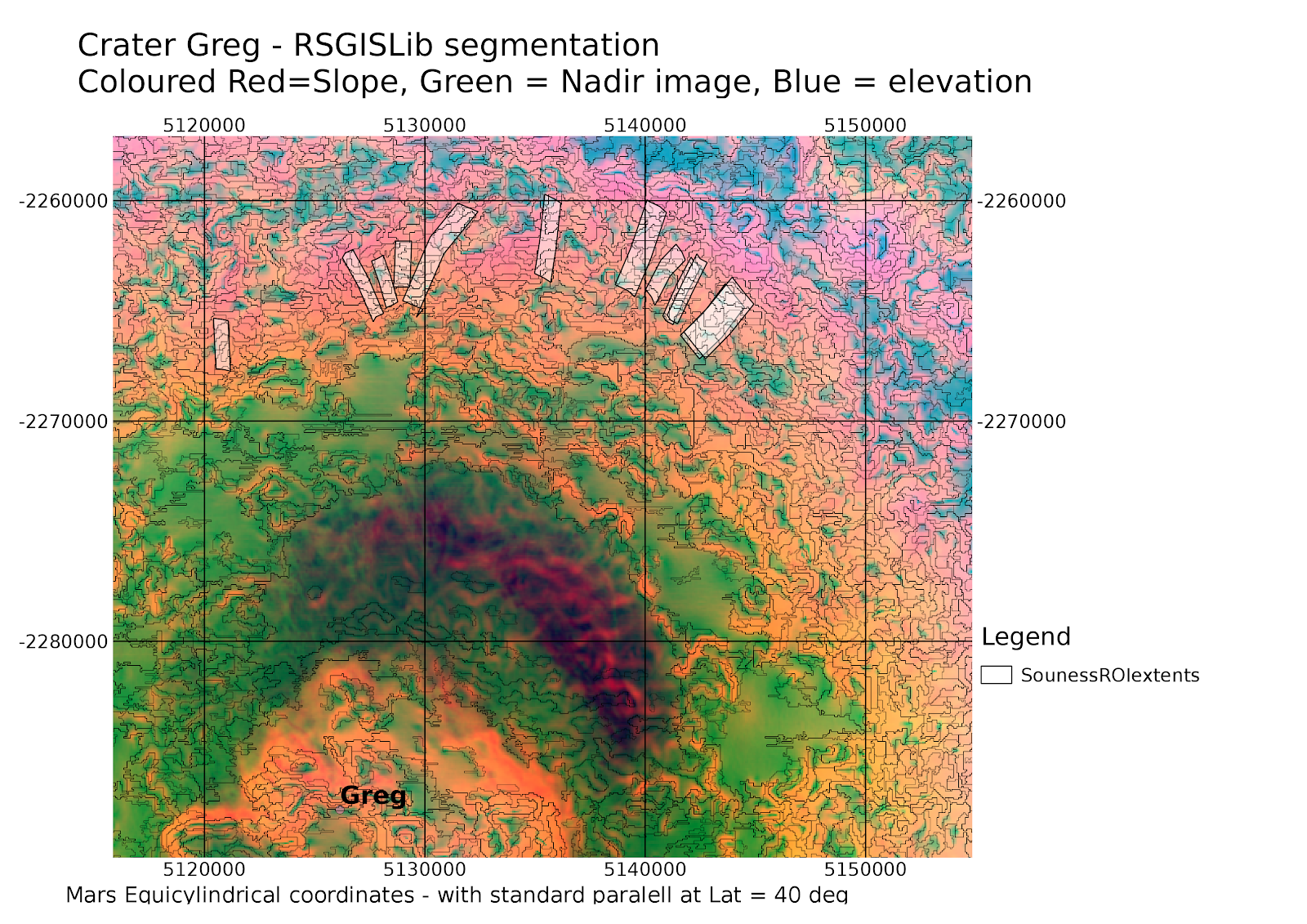