I previously shared my index to some of my posts about Martian glaciers.

I have produced zoomable images of the various parts of the Martian surface, with imagery from HRSC nadir images along with elevation.

Unfortunately, I have not been able to show the full resolution of these, because the method of tiling the 16384x16384 images I use as the basis of the work, using gdal2tiles.py and displaying using leaflet.js, involved a very large total number of files, and it seems my current web host at neocities.org has a maximum.

Update - it looks to me like even with only 4 zoomlevels, I have still managed to max out my number of files count. I am also in process of adding links to filtergraph.com where I have a number of scatter plots showing the Souness GLFs by region.

I have come across the Javascript library Leaflet.JS which I have begun applying to my maps of Cornwall.

It may be used, in conjuction with Mapbox, to render OpenStreetMap in a number of styles, for example:  link to taklowkernewek.neocities.org.

I have also made one of the versions of my cycling maps of Cornwall zoomable. This is simply done by rendering a 16384x16384px image of the map in QGIS, and then simply using Leaflet.js to make it zoomable, with the assistance of gdal2tiles.py to make the various 256px square tiles needed.

Detailing the Souness GLFs which have a large offset between the quoted centre, or are duplicates, or have been visually identified as potentially having a typographic error, I now continue with the southern hemisphere. It is possible that Souness 809 is an example of a glacier forming in a pre-existing older fluvial valley system.

For the purposes of the Bayesian classifier, I believe that only 2 of the 1309 GLFs would have been particularly problematic, S359 and S1300. The naive assumption of constant channel width does add in some of the wall terrain anyway, even if the 'centre' is still within the 'extent'. These two would be the only ones to be worth manually correcting for my purposes.

I think it could be beneficial is to retrain the classifier with the 'centre' areas only, i.e. use only the terrain elements that overlap with the centre of each GLF. Theoretically, the 'head' areas should be the terrain that governs accumulation of glaciers, and this I have already done.

An extended investigation could be to take (some?, all?) of the GLFs and try to draw a profile of the mid-line using best available imagery and then try to draw conclusions based on this.

In the Souness et al. 2012 paper, a catalog is presented with the various glacier-like-forms identified.

In my analysis, I assume a constant channel width, which is not always a good assumption, and in a few cases, there are duplicates, or what appears to be a possible typographic error. There are only a few out of the 1309 which are likely to be affected.

I have identified some of these in the spreadsheet at this link.

I show the count of Souness GLFs by the regions I used earlier:

There are only relatively few that look like they have a typographical error, for example Souness 359, and Souness 1300: 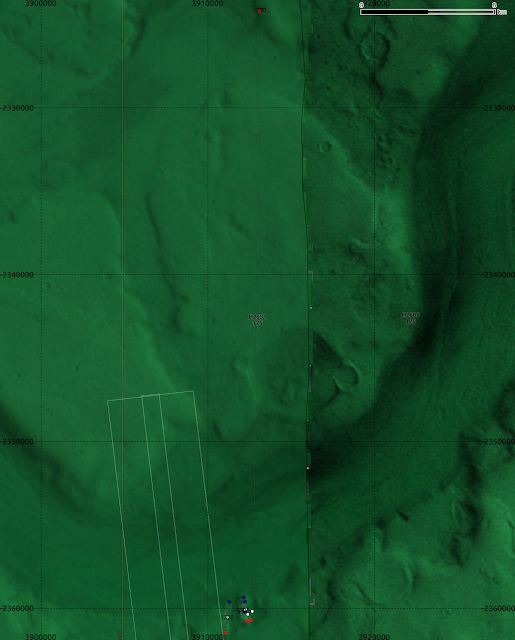 I decided to go through systematically, and look at Souness objects that either looked odd in shape visually, or had a distance between the 'centre' recorded by Souness and the middle of the channel that was more than the channel width.


I below detail the individual Souness objects where there is some kind of query, either being a duplicate or centre out of the mid-channel. In Google Earth, I show heads in blue, termini in yellow, the 'centre' with a snowflake, and left and right mid-channel in magenta and green.

Overall, I don't think this on its own will have made a lot of difference to the classifier, since any DEM segments that overlap the extent would be chosen for the input, and a little more conservative 'extent' for those Souness GLFs that currently include non-glacial terrain would not likely make a decisive difference.

I mentioned previously that I used QGIS to draw lines in the direction of slope, where I had a segmented layerstack which included elevation, slope, aspect and 2 curvature layers (longitudinal and cross-sectional). This was done with RSGISlib in a similar way to my Mars work.

There was an bug with QGIS 2.12 that meant the plotting of arrows didn't work but with QGIS 2.12.1 this seems to be working again. It still takes a long time to render with the SVG marker, even with 32GB RAM and a quad-core system.

Here are a few examples:

I show here several QGIS screenshots, at 1:10000 or larger scale, since the rendering of the arrows becomes very slow beyond 1:10000.