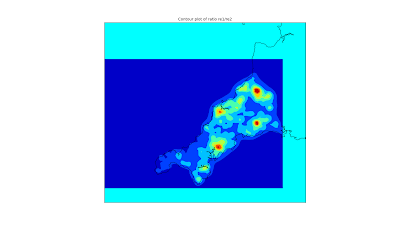 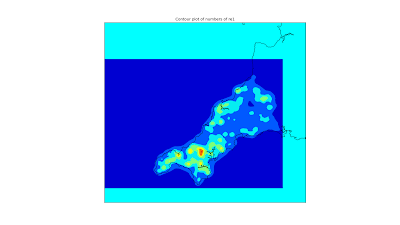 I have made a couple more plots of Cornish placenames, this time as contour plots showing the relative and absolute density of Tre- placenames, interpolated to a 100x100 grid covering Cornwall. The relative density is plotted on the upper plot, the absolute numbers in the lower one.

I am now going to tell you about something I started doing a while ago, over a year ago now, I have done work on it occasionally in time I ought to have been working on my PhD...

This is a study of Cornish placenames, using a database that was published online at www.cornovia.org.uk There is a list of placenames in that database, which shows the parish it is located in, as well as historical forms for certain names.

I thought it would be a great idea if I could visualise that in some way. For instance what about showing the proportion of placenames that start with Tre- and how that varies across different locations in Cornwall. Tre is a placename element derived from the Cornish language: tre = "homestead" in Cornish.

I found a computer readable map of parish boundaries online, and with a bit of difficulty getting the cornovia parishes to map up with the other databases parishes I came up with this map: 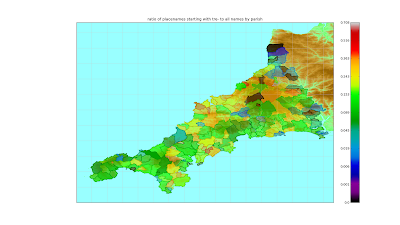